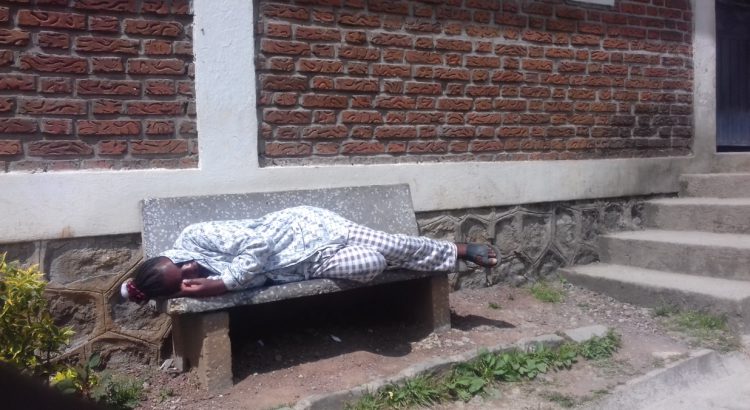 I had a brief chance to informally visit the Inside of Amanuel Mental Hospital. I found it relatively better than I had imagined it to be. There are separate compounds for male and female patients. Visitors of the patients can freely go in and out to visit their relatives. The patients have restricted access to the outside of these compounds; however,

there are exceptions. Patients who are relatively well get permission by the guards, at the gate of the separate compounds to go out to the main compound and the café. Since they have uniforms, it is easy to identify them if they engage in an irregular activity.

The compound of Amanuel Hospital is small and filled with concrete walls and floors. There is no greenery. The nurses are used to the fact that the patients lay down everywhere. There is one volleyball field and a rehabilitation hall reserved for group-work. I did not see any patient in both of the recreational and treatment places in my brief visit.

The major complaint from patient’s families, I was told, is the short stay in the hospital. A patient stays for an average of 36 days. An official working for the Hospital argued that the stay is researched to be fair enough for a person with a mental illness to get well. In addition, given to the limited number of beds in the hospital, patients must be discharged soon to leave room for pending patients who are in worse condition. The emergency ward shows a hint of the challenge. I saw many physically injured patients who are gathered in the emergency ward of the Hospital waiting in queue to see a doctor. According to an official in the hospital, these patients are brought by their family members from different parts of the country. Most of them have to go back after getting emergency aid and get back many days later when occupied beds are left for them to be admitted.

In the male’s section, I saw a patient who was chained both of his hands and legs. I also met a woman who was wounded on her lips in the females’ section. I asked her what happened and she told me that a doctor pushed and slammed her with the door of his office to get her out. I asked if this is something frequent. The official explained to me it is rare. He said there are cases when the doctors and nurses get impatient and make such mistakes. He also told me that there were family members of patients who filed cases to court due to physical abuses against the mentally ill.

Generally, Amanuel Mental Hospital is doing well. The nurses seem to have a good relationship with the patients. However, there are still irregularities that subjected patients to physical abuse. This needs serious attention. Most of all, many hospitals, that specialized on mental health issues like Amanuel should be established to remove most of the challenges that are related to crowd of the rooms and emergency ward.