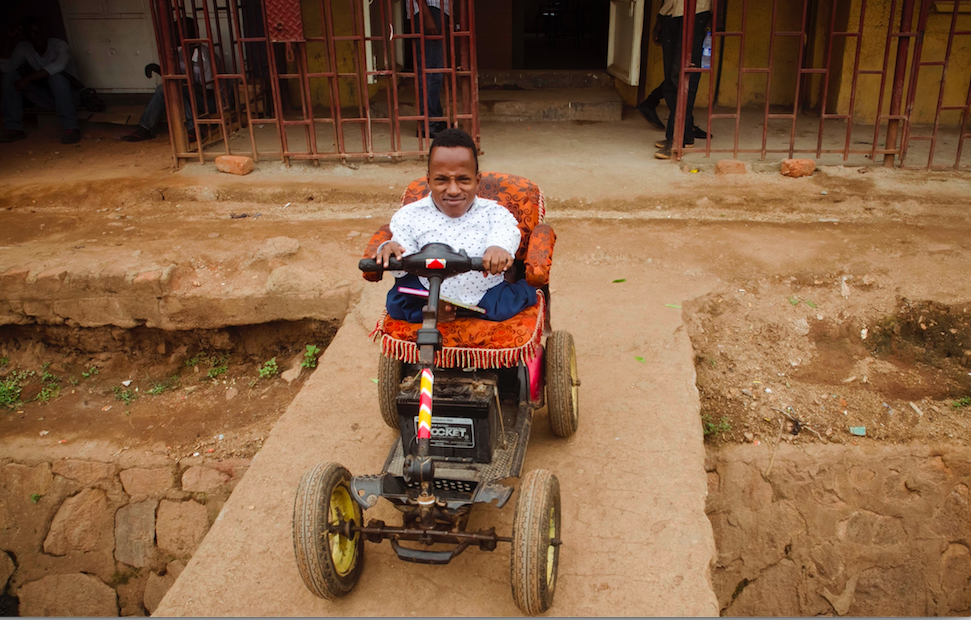 The youngest of eight siblings, Ali-yare Abdiwahab-Aden was born in 1992 in Galgadud – Somalia to a couple of nomadic pastoralists who reared camels for sale on a small scale. At birth, Ali-yare was found to have a structural defect where all his limbs were very small compared to the rest of his body. Growing up, this did not stop him from playing in the rain,  building sand houses on the shores of the sea and playing football, just like another kids.

He attended school in Mogadishu, the capital city of Somalia and graduated with a degree in Communications. Shortly after graduation, he began work at Somali Cable as a journalist reporting on social issues within the country on radio, television and print media. With the ongoing friction between the terrorist groups and government forces, his work became increasingly difficult and risky after seeing several of his fellow journalists killed, prosecuted and abducted. When presented with the opportunity, he did not think twice about finding his way out of Somalia to Uganda. Armed with a few savings and his family’s blessing, Ali-yare arrived in Kisenyi, early on in November 2017. A bold decision for a young, handicapped man, leaving his three sisters and four brothers behind, Ali believed this was the best course of action for him.

“I wanted to continue being a journalist but it was becoming too risky to work in Somalia. I saw many of my workmates get abducted and persecuted by the rebels, which scared me. On one occasion, a friend of mine who is a businessman helped me secure a ticket to come to Uganda,” he narrates. “At first, I hesitated but after a little research on the people of Uganda, I realized that they were hospitable. Many Somalis had already come here and were living a good life so I had to think twice. I agreed to move to Uganda.”

When he arrived in Uganda, this same friend took him to his home and he has stayed with him since. “It has been three months now but I want to move on. I want to have my own home, have a job probably as a journalist or translator. This is why I enrolled for English, and Computer classes in one of the community schools in Kisenyi run by the Somali Community Association.” He says.” I don’t pay anything to study, I mean the school is totally free and I thank the Somali community association for such a brilliant opportunity for its people.”

He did not know any English when he first came to Uganda but quickly realized that learning English was the only way he could survive in Uganda. Kiseeka having a large Somali community, he sought a Somali friend who could teach him English.

“I quickly looked for Somali friends within the community to teach me English. As I speak now, I can effectively communicate in English and a bit of Luganda.” He adds, “Since I am a journalist, English Language is very important in communication to different people.”

However, one of the biggest challenges he is grappling with is finding a job Uganda on grounds that he is a refugee and handicapped.

“It torments me so much. At one point I went to Mulago hospital to see if they can fix my body after several rejections by different employers, but the doctors told me that they couldn’t do anything,” He says. “My hands and legs are not normal, if I get real treatment, it would mean better life, education and knowledge. Trust me, I can be a productive person as for now in this state I am limited to some activities. I am now looking for a job as a journalist or translator.”

I met Ali at the Somali Community Association Learning Centre in Kisenyi attending an English class. His teacher, Peter Muhereza, told me that Ali is one of his best students committed to understanding and learning everything taught in class. “Ali is a committed student and I see a lot of good things coming to him after six months when he finishes this course.” He said confidently. “We teach English to help the Somalis access social services within the community in such a way they are not exploited because of Language barrier.”

According to a report by Amnesty International, Uganda has one of the best refugee models in the world, hosting over one million refugees at the moment. However, just like Ugandans, they are struggling with several challenges such as poverty, poor access to public services, unemployment and insecurity. Has the government of Uganda put in place social, financial, economic and political mechanisms to take care of the growing population of both citizens and refugees?

The Face of Poverty in Bwaise, One of Uganda’s Largest Slums