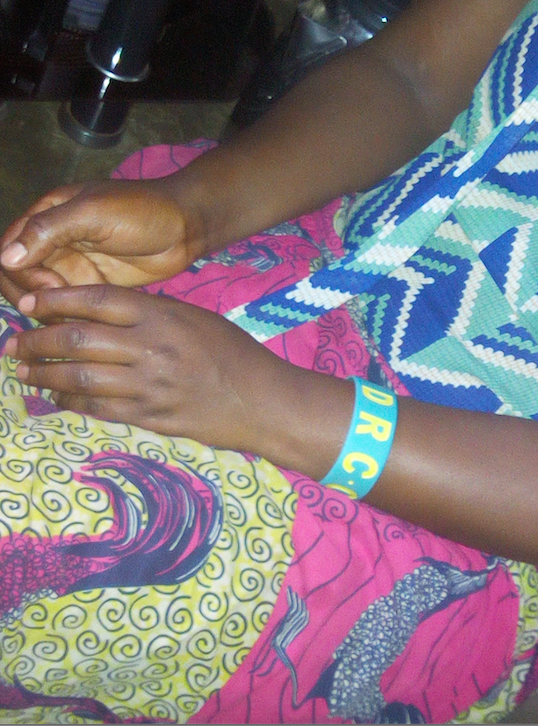 Behind the newly constructed two-lane road in Katwe lies shacks and semi-permanent houses that are home to many refugees in Kampala, a great number from the Democratic Republic of Congo. To get to her house, you will find yourself jumping over open trenches and heaps of rubbish. Alice is a 32-year-old woman who fled her home in Northern Kivu in 2007 to save her life.

“In November 2007, there was so much insecurity in Congo because of Laurent Nkunda. One night, about midnight, people came and banged the door. They were dressed like government soldiers. They said “Open, or we shall shoot  through the door.” My husband went out to see who it was. The soldiers accused him of bringing guns into Congo on his trucks. He was a businessman who used to transport beans and other foods from the village to town. They took him and some stayed behind to rape me but I fought them off. One stabbed me in the thigh as I fought but I survived and run to the priests at the nearby church. I was there for three days until they took me to the border and helped me find a bus that was going to Uganda. I could not legally cross the border because I did not have any documentation so we used shortcuts. The driver asked me where I was going but because I did not know anyone in Uganda, I just told them to take me anywhere. He said Kampala has so many Congolese and brought me to a lady in Kisenyi. The lady told me to go to Nakivubo blue where I could find other refugees from Congo who could help me. When I got there, they advised me to go to the police to report and get an I.D.”

A few weeks later, Alice found a job working for an Ethiopian family as a house girl however,  this was short lived because the family moved to Canada.

“My boss said that she had nowhere to leave me. Fortunately, I had made a few friends so I started staying with one in Masajja. I started selling bitenge in the neighbourhood and in town. One evening as I went home from meeting a customer, at about 8pm, four men attacked me near my home. They asked for my bag and I refused to give it to them. One of them slapped me hard and another hit me on the head. I blacked out. I do not know if it was one or all of them who raped me because I woke up in the banana plantation beside the road, confused with no underwear and blood stains on my clothes and thighs.”

Distraught, confused, ashamed and in pain, Alice reported the crime to the Local Council chairman and went to Interaid for medical attention.

“The chairman told me to report to police but I did not go there. I did not want people to know what had happened to me. The first thing I did was to check my blood for HIV.”

A month later, Alice discovered she was pregnant. Abortion was the first thing on her mind but she was advised against it at InterAid, because abortion is illegal in Uganda.

“I told them that I had been raped and I could not afford to keep the baby because I did not have any money but they refused. I had to keep it. The friend I was staying with was supportive throughout the pregnancy and even after I gave birth to a baby girl. My baby was healthy at first but when she was three years old, she started falling sick all the time. When I took her to the hospital, they said she had sickle cell. I had never heard about sickle cell,” she continues. “The doctor counselled me. He told me there were children that had been born this with disease and they were living a normal life. They are smart and do well in school. He said that as long as I kept going back for medicine, she would be okay. I decided that I would look after my baby.”

A few months after this diagnosis, she got a job working as a waitress in a bar where she met the man who would be the father of her second child.

“When I broke the news to him that I was pregnant, he told me to have an abortion because he did not want to have a child with sickle cell disease. I refused. I have never seen him again.”

Alice’s children are now ten and six years old, studying at a primary school in Katwe slum. Her greatest desire is to see her children educated so they can have a better life than hers.

“My only future is in my children. I do not have a lot of land that I can leave them or a house they can live in when I am gone. Education is their only hope.”