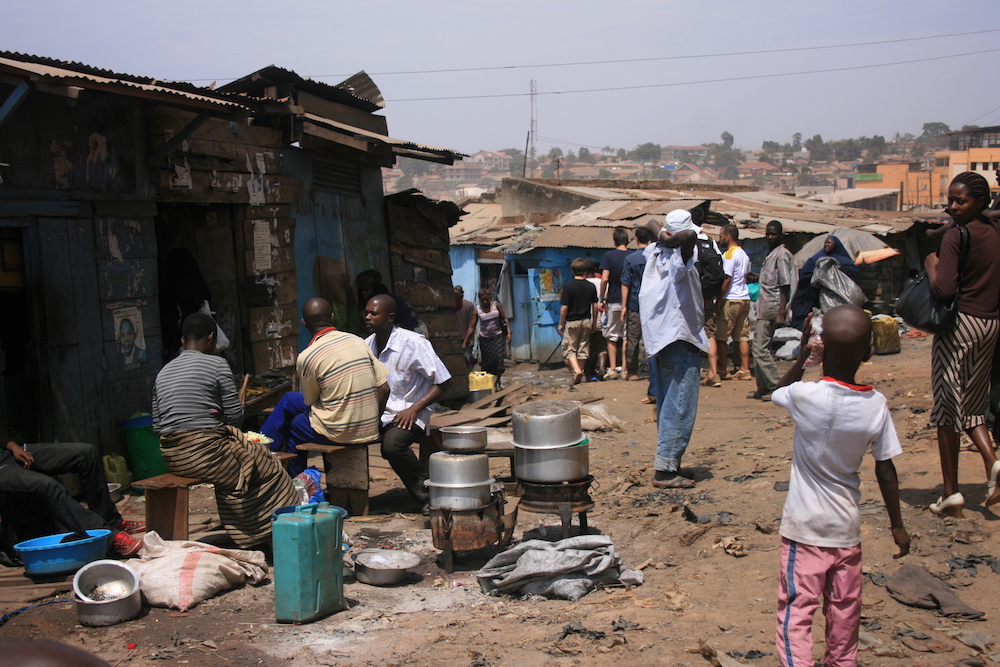 Madina and Rehema were born in 2000 and 2002 respectively, to a teenage mother. Eighteen years later, they work alongside their mother selling foodstuffs and looking after their five siblings. Their source of income is selling picked jackfruit, roasting maize, plantain on the streets of Kisenyi.

“Our parents met in the Mehta factories in Lugazi where they worked as sugarcane growers. Our mother got married at 13 and had me shortly after. Now we are 7 and our youngest brother is 2 years old.” Narrates Madina. “In 2010, mum came to Kampala to start a restaurant business and when she realized that the business was profitable, she called my father to come too but when he came he started mistreating her. We soon got tired of him treating her very badly but kept quiet about it, until 2013 when mum decided to leave him. There was a lady who helped and gave us where to stay. In those days, we did not even have food. We would go to Owino and ask people for food. Sometimes we would pick the cassava that has been cut and dry it. It is what we would eat. A few months ago we went to see him to ask him for support for our young siblings. He said he wanted us to die and leave him alone. We were a burden to him and he wanted us gone.”

A glimmer of light.

“A gentleman who worked abroad and had just come back to Uganda came to my mother and offered to take us to school, Rehema and I. He took us to Hosanna primary school where we studied until P.4. He was very famous in Kisenyi for educating girls, but people feared him because there were rumors that he raped these girls and he was HIV positive. The girls he was educating would die under unclear circumstances and whenever that happened, he made us change schools. Most of the girls would complain of terrible pain in the lower part of the stomach and bleed out. I got very scared of him and told him I did not want to continue studying,” Madina recalls.

Exposed to the risk of sexual harassment, Madina and Rehema opted to drop out of school and support their mother in looking after their younger siblings. In the beginning, their mother bought food that they would cook and hawk all through the day. They sold everything from sugarcanes, to boiled maize and eggs.

“I don’t care much about myself, all I want is for my younger sisters and brothers to go to school and get a better life than this,” Madina says. “Right now they are not going to school. When we get some money, they go to Hosanna primary school and when they come back home they help with work. They hawk sugarcane, boiled maize, and gonja. They know they have to work because that is where their school fees comes from.”

“I was rushed to Mulago because my pressure had risen very high but when I got there, they told me to go to Old Kampala hospital where I gave birth to a girl. She was put on oxygen for the first two weeks and I believe this affected her development. She is now 8 months old but cannot support her head, she does not play like other babies her age, and she cannot sit or laugh. I would like to take her back to Mulago for an Xray to determine what is wrong,” says Rehema.

On any typical day, the girls start their day by cutting jackfruit by the roadside and roasting maize and plantain for sale. After selling all they can for the day, they go back home to make lunch for their siblings.

“We cook once. Lunch and supper. If unfortunately the food gets done or it is not enough then we eat what is left over from the business. Sometimes we go without eating.”

The family stays in a two-roomed house in Kiguli zone, Kisenyi, where they share space with their landlord.

Rehema’s desire right now is to learn how to braid hair.

“I feel like it is an important skill through which I can earn a daily income and support myself and my family.”

What does the future look like for these girls and their siblings? Without access to education and opportunities for skills development, they run the risk of remaining below the poverty line, unable to afford basic needs, education and extending the line of generational poverty. In a 2017 report by Oxfam on income inequality in Uganda, a relationship is established between generational status and income inequality.

“Poverty and growing inequality mean that there is a glass ceiling beyond which poor people cannot rise. This inequality cuts across generations. The children of wealthier people who can afford private education, will have access to greater opportunities and will themselves be richer. The children of those at the bottom, who cannot afford quality education or other such investments, will follow in their parents’ footsteps and will be as poor as they are, or even poorer. African spiritualists might describe this as a generational curse, a jwok that hovers over a person’s life and can only be got rid of through exorcism. In this context, the method of exorcism would be advocating for policies that fulfill people’s right to equitable development, as enshrined in Uganda’s Constitution.” Who Is Growing? Ending Inequality In Uganda – A report by Oxfam Uganda.

In a country whose headlines are constantly brandished by corruption and embezzlement scandals, the citizens suffer most the consequences of the mishandling of public funds. It is estimated that Uganda loses about $250m (USh 866bn) each year due to corruption. In terms of education spending, the money lost every year could finance 100 secondary schools or five universities. (Oxfam)

Until the wheel is broken, deliberately, by the government most importantly, through skills training and improved public education, this vicious cycle will continue to keep Ugandans in poverty.

Thank you for visiting this website and reading the stories we publish. Would you like to render any assistance to Madina and Rehema? Or any further information on any story you have read? Kindly get in touch with us at kweetaug@gmail.com