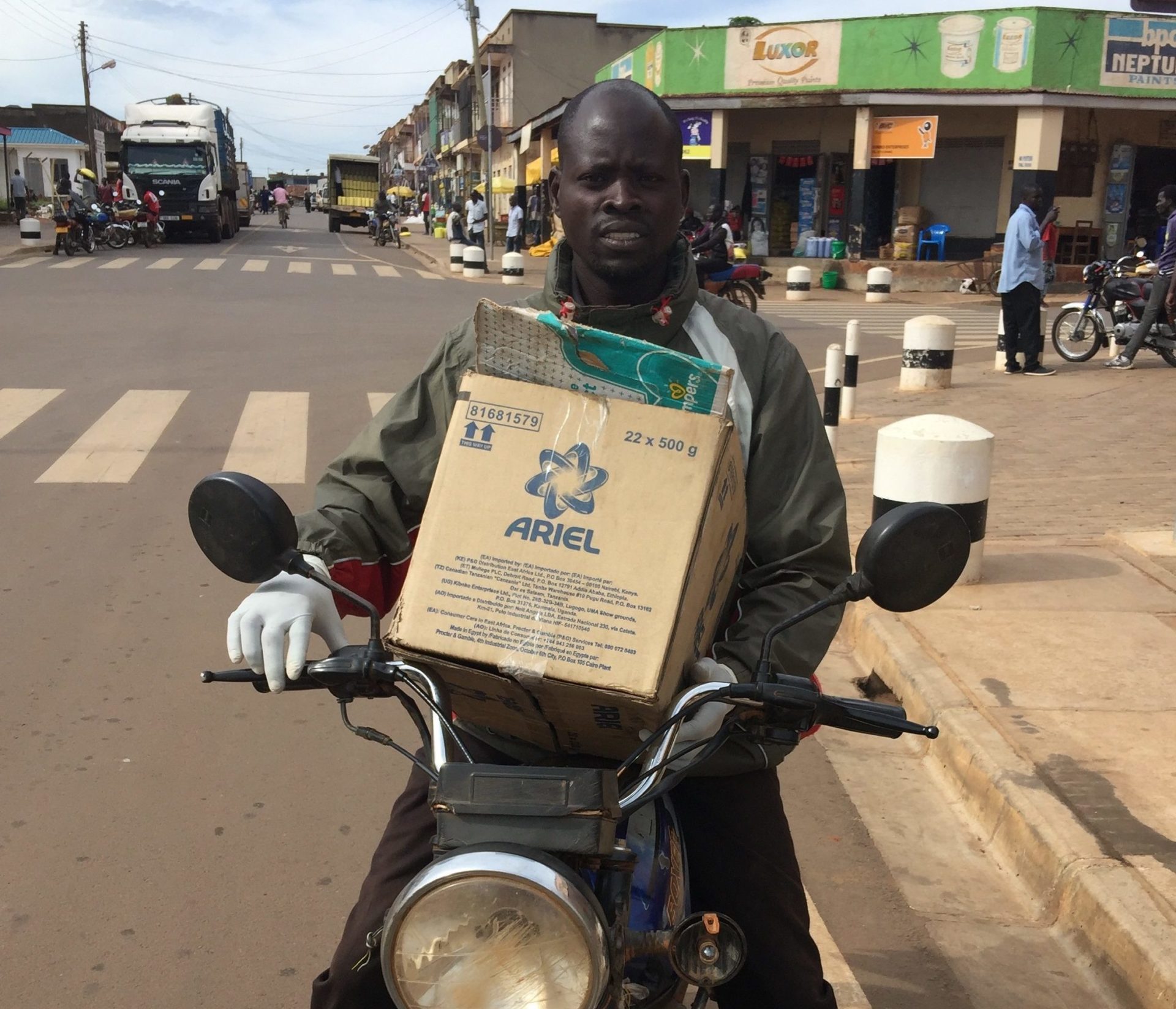 Most people would have noticed the quiet. When Uganda introduced more restrictive COVID-19 lockdown measures in late March, it was as though someone had turned down the volume on the entire country. Gone were the throaty revs of cars starting and stopping in the choking rush-hour traffic, and the frantic voices of sports commentators spilling out the doorways of the city’s ubiquitous sports betting centers, the fresh eggs sizzling in pans at roadside omelet and chapati stands, the chatter of taxi touts and hawkers gathered on street corners.
But motorcycle driver Denish Komakech didn’t miss any of that. Since he lost his hearing at the age of 2, he has navigated the world without sound. So what struck him that first day of the lockdown
wasn’t the quiet but the stillness. As he rode his motorcycle into town looking for passengers, he saw that the streets were nearly empty except for baby-faced soldiers with big guns and a few plucky vendors selling bits of soap, salt, or sugar to the occasional passerby.
Finally, he stopped to ask a friend what was going on. A lockdown, the man explained in sign language. To stop the coronavirus. “Do you know how it feels like to always be the last person to know
about any serious issue because you are deaf?” says Komakech, speaking to the Monitor through a sign-language interpreter. “That is how I felt – like I had been that last person to hear about the
lockdown and the pandemic.”
Being a bod boda driver in Uganda is tough work in the best of times. The country’s urban roads are choked with bikes, known locally as boda-bodas, swerving precariously through traffic as they rush to carry riders and the teetering stacks of their cargo across town as quickly as possible. Profit margins are razor-thin, and police harassment and accidents common. (A 2010 study at the country’s largest hospital found that a full 75% of patients admitted for trauma injuries sustained in traffic accidents had been involved in boda-boda crashes.)
But the job had always been harder for  Komakech, who communicates with his customers on slips of paper and via text messages. And on top of that, these are certainly not the best of times.
In mid-March, before Uganda had even a single confirmed coronavirus
case, President Yoweri Museveni announced lockdown – since extended on public gatherings, and closed schools, churches and restaurants. He followed up at the end of the month by banning all public transport except for cargo, effectively shutting down business for most of the country’s boda-boda drivers.
Although motorcycles are allowed on the streets during the lockdown, drivers are only permitted to carry cargo, and only until 5 p.m., before a nighttime curfew goes into place. Police have been impounding boda-bodas from drivers who violate these restrictions and ordering them to pay a hefty fine to have their bikes returned. For Ugandans like Komakech, that creates a complicated situation.
He is part of the 80% of Uganda’s workforce that works informally, according to government estimates – millions of cleaners, drivers, hawkers, and others who make their living day to day, in cash.
Most, including Komakech, have received no support from the government since the lockdown began. And if they can’t work, many have asked, how will they eat?
“When I realized that we had been stopped from riding our boda-bodas, many thoughts ran through my mind, like how it was going to be tough to look after my family,” he says. But Komakech is no stranger to health crises. He was only two years old when he and his brother were diagnosed with measles. His brother died. Komakech survived, but lost his hearing. Since then, he has relied on a combination of sign language, written notes, and lip-reading to get by. He says he is often harassed by the police and cheated by his riders when they realize he will struggle to argue back.
Activists for people with disabilities say people like Komakech are especially at risk during the country’s coronavirus lockdown: in part because, doctors say, some disabilities compromise the immune system, but largely because people with disabilities have often had
traumatizing experiences with the health care system, or are afraid to seek medical care. And many, like Komakech, don’t have the same access to public service announcements, billboards, or other forms of public health messaging as the rest of their community.
“The government failed to consider people with disabilities right from the beginning when they came up with lockdown restrictions,” said Denis Lakwonyero, an activist and Gulu district councilor representing persons with disabilities in local government. “Yet people with disabilities are the most vulnerable in this crisis.”

According to Lakwonyero, most people with disabilities struggle to get information, especially those living in remote areas.  For now, though, Komakech is less worried about the disease and
more worried about how he will keep paying his family’s bills. Those thoughts press down hard on him as he rides his boda-boda into town each morning, looking for people who need items transported somewhere. As the government has begun to loosen restrictions on cars, buses,
and taxis in recent weeks, Komakech has listened hopefully for an
announcement that boda-boda drivers will once again be able to carry passengers. So far, however, President Museveni has said that motorbikes will still only be allowed to carry cargo because of the
close physical contact required to ferry people.

Still, Komakech cannot help but get his hopes up that one day soon, the restrictions will ease. He has a large, unpaid bill for a recent hospital stay by his daughter, and soon his family will need to hire someone to help them clear their small plot of farmland to prepare for the planting season. Before the lockdown began, he had been taking driving lessons and saving to buy a secondhand car. There is more money, after all, in driving taxis than in driving boda-bodas.
For now, however, the restrictions remain. And so Komakech has tried to reign in his horizons. For now, all he thinks about is the day ahead. To survive it and see another – for now that will have to
be enough.

Riding across Uganda to provide sunscreen for people with albinism

Riding across Uganda to provide sunscreen for people with albinism