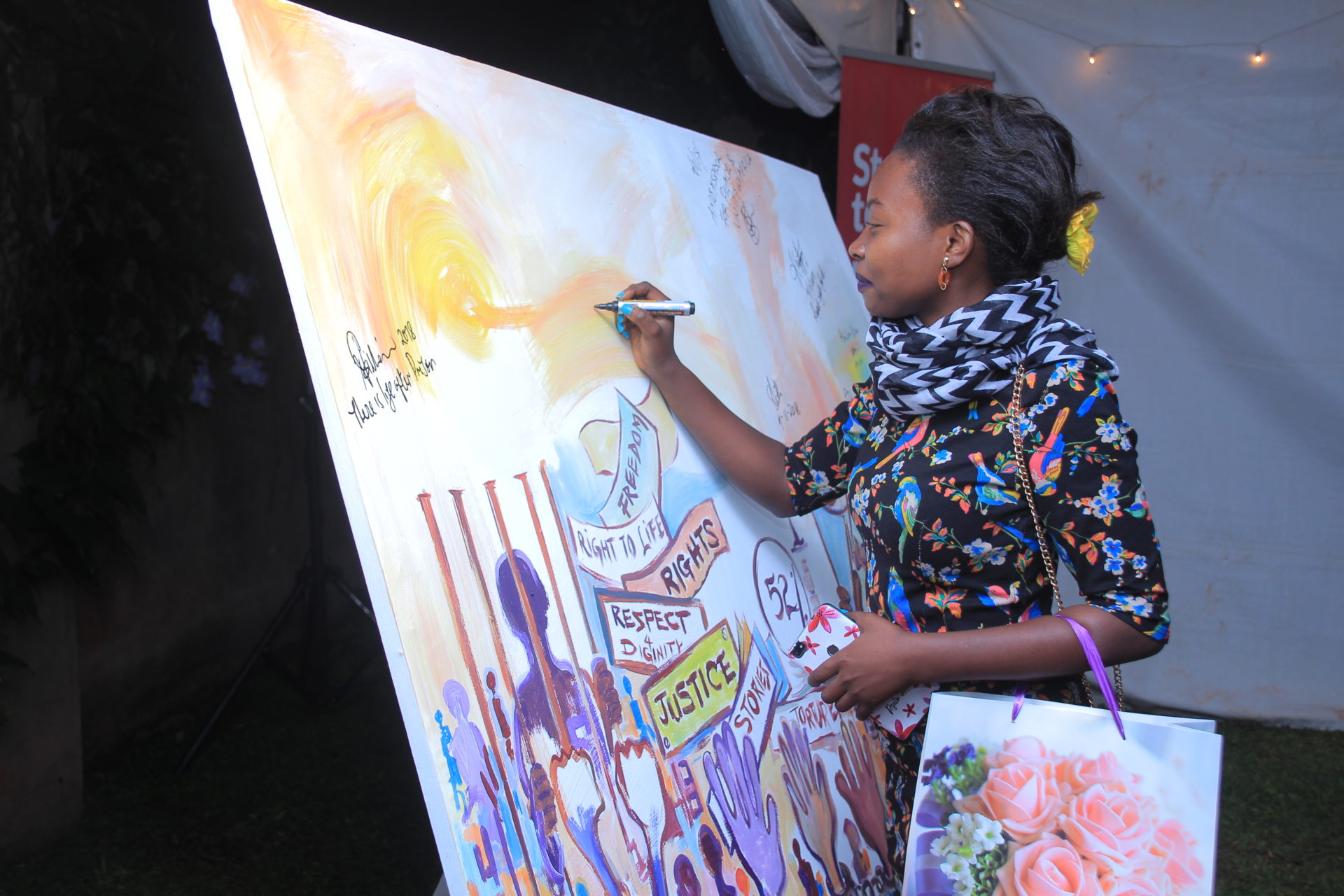 The final episode of Michaela Coel’s ‘I May Destroy You’ which begins with Arabella, the main character, (finally) recognizing the face of the man who sexually assaulted her on a drugged night plays out in 3 different ways. We are returned to the point of recognition thrice, with a different ending each time. Possibilities. I think of this word as an answer and a question. What else is possible from here? What other world? What other universe?

The narrator in the four-minute short film, Happy Birthday, Momo!, uses the word universe. “I remember it like it was yesterday, the first time the universe so graciously gifted me,” they say. The universe as giving gifts with the first time at eight years old.

First time. The “first time” is haunting because how many more times have there been? What is the nth and final time? Does it exist? For 8-year-old Momo, the sexual violence enabled by patriarchy over represents[i] itself, erases, undermines any other ‘gifts’ she might have received to normalize violence, and consequently its effects, as the gift. A ‘gift’ they come to expect every birthday. Like with Coel’s final episode, we are returned to the scene of yet another birthday and what gift it might possibly bear. The 20th birthday gift is a panic attack, triggered by an attempt at a surprise party from friends who know no better.

The birthday is a marked event. “Birthdays. We all look forward to them. Look forward to the attention, the gifts, things people around us are usually too busy to give the other 364 days of the year. And I am a lucky one.” The narrator begins and ends with these words, albeit in different tones, the beginning sinister and end hopeful.

The film is a true story based on the lives of Auma Rita and two other Ugandan girls… I think of the ellipsis as a redaction, a metaphorical #MeToo, holding space for the exponent to which two must be raised because we know the number goes many more times beyond that. That is the banality[ii] of sexual violence.

On the day Dr Stella Nyanzi was acquitted, finally ending an 18-month prison sentence for violating the Computer Misuse Act, a young woman, Sheena Bageine, was arrested for the same. Dr Nyanzi was accused of offending President Museveni. Bageine offended rapists by sharing their names and the stories of those they had assaulted. Two men, one with almost absolute power, the other with an ego to protect panicked and used the law to, perhaps, prove a point to these women.

Silence. The culture of silence. That is what the panic to run to the law that never protected women in the first place is about. James Baldwin puts it best: “And it is absolutely inevitable that when a tradition has been evolved, whatever the tradition is, the people, in general, will suppose it to have existed from before the beginning of time and will be most unwilling and indeed unable to conceive of any changes in it. They do not know how they will live without those traditions that have given them their identity. Their reaction, when it is suggested that they can or that they must, is panic.”

Writing about the institutionalization of sexual violence in Uganda, Fionah Komusana, a feminist lawyer notes that our collective silence is the reason abusers abuse and continue to be shielded from accountability. While she focuses on how different institutions, more specifically the police, fail women, I am interested in how women are moving away from these expectations. Social media coming together to ‘name and shame’ that led to the arrest of Bageine is an example of women acknowledging the failures of institutions and deliberately choosing to hold space for each other.

Lisa Kanyomozi works in the Ugandan media industry, presenting two radio shows. One of the shows was conceived to be a platform to share feminist ideas. However, a couple of shows in, the producers threatened to take it off the air if the presenter did not ‘tone it down.’ They claimed it was too radical and perhaps offensive. This was not feedback from the listeners but rather the presumed ‘logical’ reaction of a Ugandan audience to anyone preaching feminism.

Outside of her job on the radio, Kanyomozi observes that the conversations that happen on social media about feminism are overly repetitive, constantly requiring the emotional and intellectual labor of feminists. Learning from bell hooks, Kanyomozi strongly believes feminism is for everybody and should be mainstreamed in the same way religious messages are spread.

Kanyomozi consequently started a YouTube channel to discuss feminist theory. As a writer herself, she believes that mindset change can translate into material change in our daily lives. She, for instance, notes, “if enough people understand consent, we can do away with rape culture.” When I ask about her vision of freedom, she quotes Nina Simone. No fear. “A society that has adapted the feminist vision, where anyone is free to explore different aspects of themselves, gender, sexuality, without fear. Where we are not continuously fighting for and explaining our existence.”

There are almost daily requests to have women on panels on television. Television that does not come with a dash of casual misogyny. Black No Sugar created a show which hosts women discussing different everyday issues ranging from mental health to sex. The erasure of women from history as it is.

Wulira! is a Ugandan podcast that is providing an alternative education that contends with our history in ways that show its overarching implications. Rebecca Rwakabukoza who started it as a way to unlearn and relearn her Ugandan heritage is happy to bring more people along this journey. The podcast has tackled issues such as previous pandemics, the history of the Marriage and Divorce Bill in Uganda.

Lakwena magazine has created a space for women to just be, having profiles of writers, women-owned businesses, and incisive commentary on societal issues. These are all ways women are showing up and holding space for each other. Inhabiting other worlds. Otherwise possibility.

“What I’m saying is we breathe, and in the fact of our breathing, we experience—not optimism per se but—the plural event of possibility as beyond exhaustion. We keep going. We fight for our lives here, now …” – The Lonely Letters, Ashon T. Crawley

Happy Birthday, Momo! begins with an alarm clock that wakes Momo from sleep. It is an unwelcome interruption because it is her 20th birthday. Another birthday. I have been thinking of the alarm clock as a metaphorical #TimesUp. The clock is at midnight – could be midday but I’m choosing to go with what serves my train of thought – the beginning of a new day, where everything, something, could change. “On my 23rd birthday, I thought I’d gift myself…”

But. It is possible to want and create something else. Something that looks and feels like freedom. Something that feels good. I love that there is room for that imagination. And I wanted to stay longer with this other world: universe Momo created in the bathtub with a cocktail, a blunt, and candles. To feel something, like the narrator says. Something good. This also reminded me of the scene in Kemiyondo Coutinho’s short film Kyenvu where she checks herself out in the mirror wearing a miniskirt and feels good about it.

But as Crawley put it, and as the two scenes in Kyenvu and Happy Birthday, Momo! go on to play out, violence sometimes makes these freedom dreams[iii] unlivable.

The film explores this trauma in, sometimes graphic, detail. These three productions; I May Destroy You, Happy Birthday, Momo!, and Kyenvu, do not come with trigger warnings. I think this is because they are about so much more. There is humor. There is play. There is the fact that Momo got her blunt from her boda guy. And what is this thing about birthdays?

There are also unlikely co-conspirators in imagining: creating other worlds. I think about the scene of 8-year-old Momo walking into a room to receive the ‘gift’ for the first time. And the final scene of Momo: Rita’s niece: nephew; walking in 15 years later to give a gift. The gift of a different universe: world.

To juxtapose the two is to get a metaphor of healing, reclaiming agency, and how we hold each other.

[i] After Sylvia Wynter – Unsettling the Coloniality of Being/Power/Truth/Freedom: Towards the Human, After Man, Its Overrepresentation