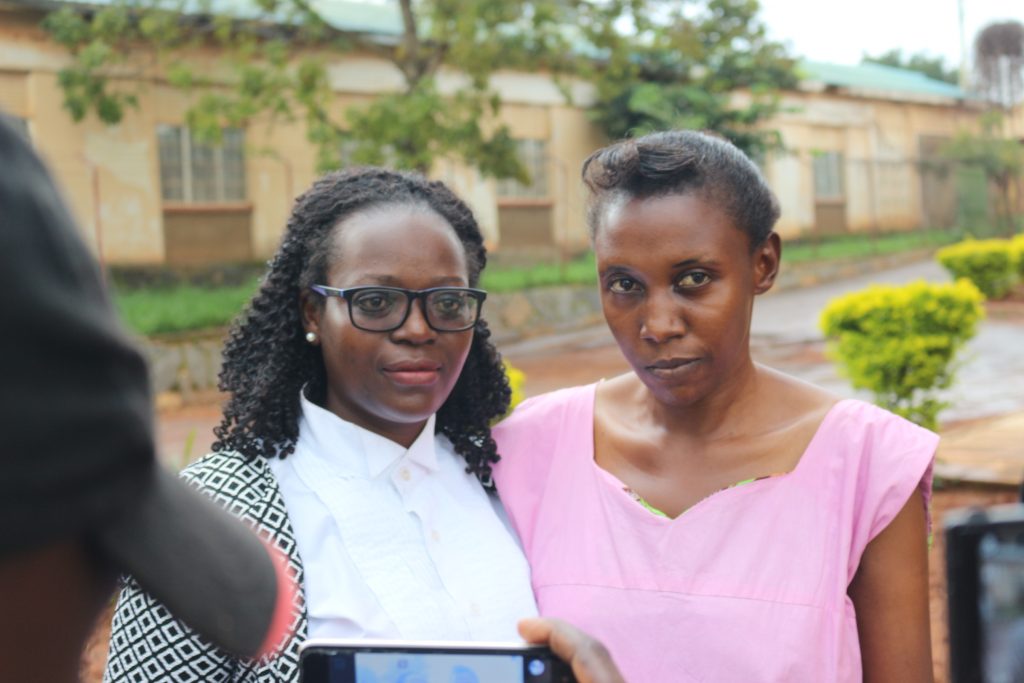 Lawyer Immaculate Owomugisha together with Sylvia Kyomuhangi at court in Gulu after the sentence was overturned. (Courtesy photo)

For eight months, Mary Kemigisa, a single mother of seven was remanded to prison for allegedly defiling a 12-year-old son of her neighbour. Although the 32-year-old was later released in March 2019 without any charge, she says the experience left her devastated and lonely.

She was unwelcome back home and shunned by the community. But before serving time in prison, Kemigisa was running a laundry business for a living. “I had to move to another village because I felt people here knew me as a rapist who goes around spreading HIV,” says Kemigisa, as she narrates her ordeal with tears rolling down her cheeks.

Kemigisa has also been living with HIV for the past 10 years.

Her troubles started one Sunday evening. She had been intercepted by her neighbour and members of the village as she returned from the river where she had spent the afternoon washing clothes—which she does as a business. Earlier, the neighbours’ son has been to her house playing with her 10-year-old son.

“They asked me if I had seen the boy that day and I said yes. They also asked me what he was doing at my house. They asked me why he was in my backyard.  A lot of questions started coming from the crowd. I heard them saying I raped the boy. They said I had infected him with HIV,” remembers Kemigisa. But just as the interrogation was going on, she was bundled onto a boda boda and taken to a police station where she spent one week before being charged with aggravated defilement and transferred to a prison facility in Fort Portal Municipality. Here, she would remain on remand for eight months before the court could drop the case after her accuser failed to show up in court on numerous occasions.

The accuser, Faridah Asiimwe said in an interview for this story that she lost interest in the case after her son tested negative for HIV. Asked whether she still believes that Kemigisa defiled her son, Ms Asiimwe said she is not sure, but added that she had been tipped by another neighbour who spotted the boy in Kemigisa’s compound. “You know the boy had just been circumcised and was in a dress. We all know the woman’s status. As a mother, I panicked and did everything I could to ensure his safety,” Asiimwe explained.

Immaculate Owomugisha, a human rights lawyer relates with this story. Since Uganda passed the HIV/Aids Prevention and Control Act into law in 2014, cases like Kemigisa’s have been common, according to Owomugisha.

Over the years, she has represented different individuals accused of willfully transmitting HIV. One such case is that of Sylvia Kyomuhangi, who was convicted of having injected a baby with infected blood and was sentenced to two years in prison.

Although the sentence was overturned last year, Owomugisha said Kyomuhangi’s life was shattered even as the court later found her innocent. She lost a job as a teacher and had her children removed from her. She is now trying to get her life back, but she remains judged, says Owomugisha who is also a legal officer with Uganda Network on Law, Ethics and HIV/Aids (UGANET).

She blames incidences like these on the HIV Prevention and Control Act 2014, which among other things criminalizes the intentional spread of HIV.

The law was controversially passed amidst criticism from human rights groups because of problematic clauses 41 and 43 that provide for the prosecution of a person on grounds of attempted and intentional transmission of HIV. Another criticism of the law was on Article 18 (2) which gives health workers the liberty to disclose one’s status to a third party.

However, despite being in place, the law has not been applied to charge anyone in the courts of law for the past five years. For example, in the case of Rosemary Namubiru, which came up at the time when the law was being actively discussed, the State opted to prosecute the case using the Penal Code Act, rather than the HIV Act.

Namubiru, an HIV positive nurse was sentenced to three years in jail for criminal negligence as the court ruled that she had put the life of the baby she was treating at risk of acquiring HIV when she pricked herself while administering an injection.

In her defence, Namubiru had argued that it was a common accident for medical workers to prick themselves in the line of duty. Namubiru was eventually released after spending one year in prison. “They tested the baby and the results were negative. After being released, she (Namubiru) couldn’t continue residing in the same area because people started threatening to kill her,” says Owomugisha.

This reporter tried to establish what Namubiru has been up to since her release from prison, but a friend who preferred anonymity said she had since relocated to Fort Portal as she struggled to find a job in the medical sector where she had previously worked for 20 years before her conviction.

Shamim Nalugemwa, a human rights lawyer, notes that the law hasn’t been used to charge anyone in the past five years. Even as it looked urgent and considering the interest it generated at the time, Nalugemwa notes that the non-application of the law goes to show that HIV specific laws may not be necessary. She says laws such as the Penal Code Act, and specifically, section 171, which was used to charge Kyomuhangi could be adequate enough.

Under this section, a person can be charged with committing a negligent act likely to spread disease.

This same section is being used to charge persons for willfully transmitting HIV to others, including a case that is currently before the Nabweru Magistrates Court, where an HIV positive woman is being prosecuted for allegedly breastfeeding her neighbour’s daughter.

Because of such a hostile environment, HIV activist Beatrice Were says women often find themselves as the biggest victims of the law, given that they also make up the majority of people living with HIV in Uganda. Were, who has been living with the HIV virus since 1991 says the criminalization of HIV spread through a law not only violates human rights but is also a setback to efforts being put in place to curb new infections.

The HIV law, according to Were has failed to address important issues such as disclosure, which are high on the agenda when it comes to people coming out of hiding, seeking HIV testing services and the treatment that follows thereafter.

Uganda has been making progress to curb new HIV infections as part of its efforts to meet the UNAIDS set targets of having 90 percent of the people testing for HIV, 90% of those that test positive enrolling on treatment and 90% of those on treatment being virally suppressed.

Dr Joshua Musinguzi, who heads the Aids Control Programme at the Ministry of Health, says despite being in place, the law has not in any way deterred people from seeking care. This, he said can be evidenced by the growing number of those who come to test for HIV and those being enrolled on treatment.

“Only 80 percent know their status because men have lagged behind. It’s unbelievable that they say women are specifically targeted because 90 percent of the people who have tested are women,” explained Dr Musinguzi.

On the contrary, Dr Musinguzi believes the law has some positive attributes that rarely get mentioned. For instance, he says it is because of the 2014 HIV Prevention and Control Act the Aids Trust Fund was created.  Although not yet functional, Dr Musinguzi notes that it will have a huge impact in terms of funding for the HIV/Aids response, once the fund is in place.

But Owomugisha believes it does to make sense to keep a law that is not being implemented in the law books. It is for this reason that UGANET decided to go to court in 2016 to challenge aspects of the law that they feel infringe on the rights of individuals. The case was filed in the Constitutional Court in 2016, although the petitioners say they have not received any feedback from the Courts.

However, HIV criminalization is seen to be on a rise in many countries as a report released by the HIV Justice Network in 2019 shows.  It says between October 2015 and December 2018, at least 913 people living with HIV were arrested, prosecuted, convicted or acquitted in 49 countries.

The largest numbers of cases at 314 were reported in the Russian Federation, 158 in the United States, 29 in Ukraine, 27 in Canada, 16 in Zimbabwe, 15 in the Czech Republic, 13 in the United Kingdom, 12 in France and 11 in Taiwan. In some 14 countries, the law was applied for the first time.

Back here in Uganda, just last year, nine cases that had a link to HIV transmission were taken to court, and this is the biggest number to be recorded in the country ever. Owomugisha notes that HIV specific laws have put people in fear of disclosure and being stigmatized, adding that other countries with similar laws have also chosen not to apply it.

“Look at the East African HIV Prevention and Control Act that is supposed to be applied across the region. It’s a good law much better than ours but it hasn’t been applied too,” she notes.