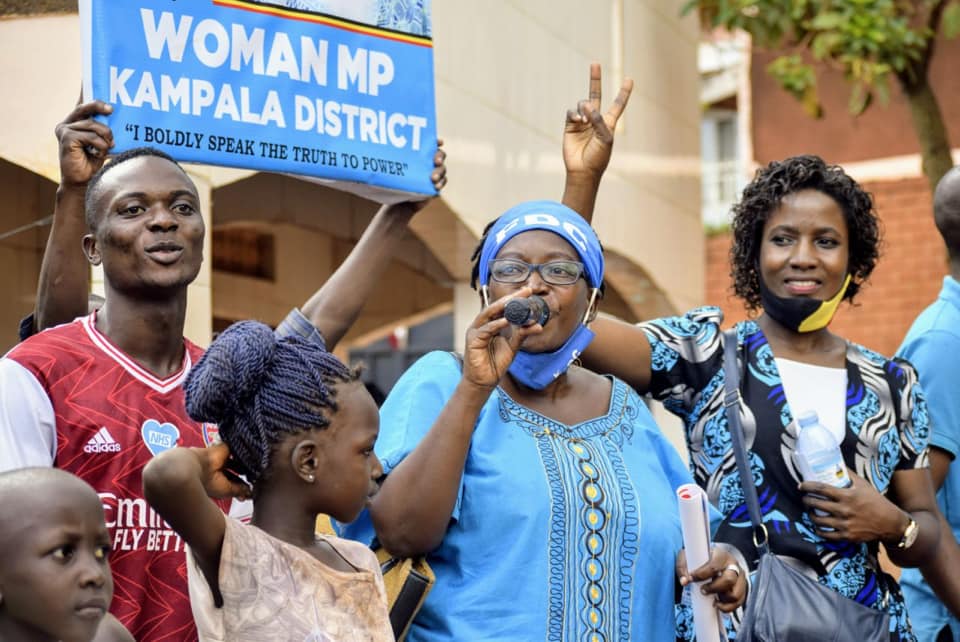 In Uganda, female political candidates face structural and cultural obstacles including sexism, biases, and unequal media coverage. Many are held to a different standard compared to their male counterparts. The COVID-19 pandemic has also presented additional hurdles with the transition to virtual campaigns. Recently, we held a conversation with two feminists who are contesting for political office: Dr Stella Nyanzi who is running for the Kampala Woman Parliamentary seat and Ms Rebecca Adile Achom who is aspiring to be the Woman Councilor V chairperson for Nakawa Division.

What was your first reaction when you learnt that campaigns would be held virtually?

Dr Nyanzi: When I heard that Uganda was going to hold “scientific” elections (with campaigns being held digitally), which basically meant that we were only restricted to public and social media and small groups of gathering, my first instinct was that I was going to beat my opponents who cannot afford access to radio, television, and social media. I thought because I am an urbanite, I’m going to compete favorably since I work a lot on social media. I consider myself a Facebook ninja and queen of social media. However, because I am a woman living in Uganda, I know that I do not live in isolation.

I began to listen to stories of many women who are not as privileged and unable to easily access TV airtime. There are many women in Uganda whose names will not freely get them space on television, many others cannot access electricity yet would want to participate in elective politics. The fact that rallies and political gatherings are banned during this campaign period means I cannot get feedback from my supporters. I cannot reach women in my constituency who do not have access to electricity or access to radios.

A lot of women cannot afford to participate in the current form of electoral campaigning because of costs or the lack of technical expertise. While others have been excluded simply because they are women. The media doesn’t find them attractive because their names are not known. As an educated woman who has been operating on social and public media, my personal privilege does not blind me to the challenges that exist for others.

Ms Achom: I have previously been a mobiliser for other people’s campaigns and so engaging in virtual campaigns this time has limitations on the number of people I am able to reach and engage with. We were so used to the traditional way of doing things. With virtual campaigns, you have to invest more in online platforms and this comes with a huge cost. As a young woman, this affects me in many ways.

Has how the media reports on women generally affected how you present yourself as a candidate?

Dr Nyanzi: I have been in the public eye for quite a while. I am used to public media portraying me using negative stereotypes. When I submitted my nomination forms to my party-Forum for Democratic Change (FDC), and an endorsement to the People Power movement, I was called a political prostitute. And so, for women like me who can participate in a political party and also seek endorsement from a movement, the idea of promiscuity and value judgment has already been given.

Early on, one of the key questions that my campaign team and I toyed with was how I was going to present my single-motherhood status. I told them that motherhood was a good thing, however, singleness for a woman of my age can be used against me. I have had to deal with questions like, if she cannot manage a marriage, how will she manage a constituency? This is not the portrayal that men are going to face. In terms of preparing for the campaigns, I fronted the idea of being a voice for the voiceless and a voice can be genderless. I also have the benefit of having a professional title and so people will not dwell on whether to call me Miss or Mrs.

Does it help how you perform for the public media?

Dr Nyanzi: Not really. I have had to insist that I am Stella Nyanzi, I am offering myself to be a legislator, I am a good candidate as a political actor, take me on my own terms. Not because I am a woman.

Ms Achom:  I am contesting in an urban setting and the question I keep getting is whether as a young woman, I will still be marriageable enough when I get into office. The situation is even more challenging for single mothers who seek political office. In political spaces, patriarchy is at its highest. The space is toxic for any young woman. There will be a lot of judgment about how you dress or look. There is no woman in the political space who has not experienced abuse because of her dressing or status or looks. Social construct has affected women’s participation in political spaces.

Dr Nyanzi: Because I’m contesting for the Kampala Woman Parliamentary seat, I have had people say, if you think you are strong enough and have what it takes, why are you going for the affirmative action seat? It’s as if it is criminal to contest that seat yet the constitution is clear that every district shall have a woman representative.

A lot of journalists and media specialists are ignorant about what the law provides. I have been in radio and TV studios where expert journalists say to me, so why don’t you share your manifesto with other women voters. I have to keep reminding them that my position may be under the title of Kampala Woman Member of Parliament, however, those who vote for me are both men and women.

Often times, the coverage of women and men differs in the media. Is this something both of you are facing as you vie for political office?

Ms Achom: Media coverage comes with the whole issue of economic access to that very media. I will look at other alternatives to engage with my people.

Dr Nyanzi: Particularly when it comes to public media reports and coverage of topics during this season, I find that most of the political programmes are run by men—the interviewers are men, the people in the studio are men, editors are men, majority of the people that I deal with generally tend to be men. Many times, when I go for TV interviews and there is an interlude and I want to touch up my lipstick, I wonder what these men keep thinking.

The second issue for me is how men are portrayed: as those who can. I haven’t seen a lot of criticism around the inabilities of male politicians or candidates. However, when it comes to covering stories of women in politics, particularly in Kampala District, it is often about a woman’s failings and her weaknesses. And these negative stereotypes tend not to be debunked by the media. I think it is important to also highlight the stories of women who have achieved in politics. 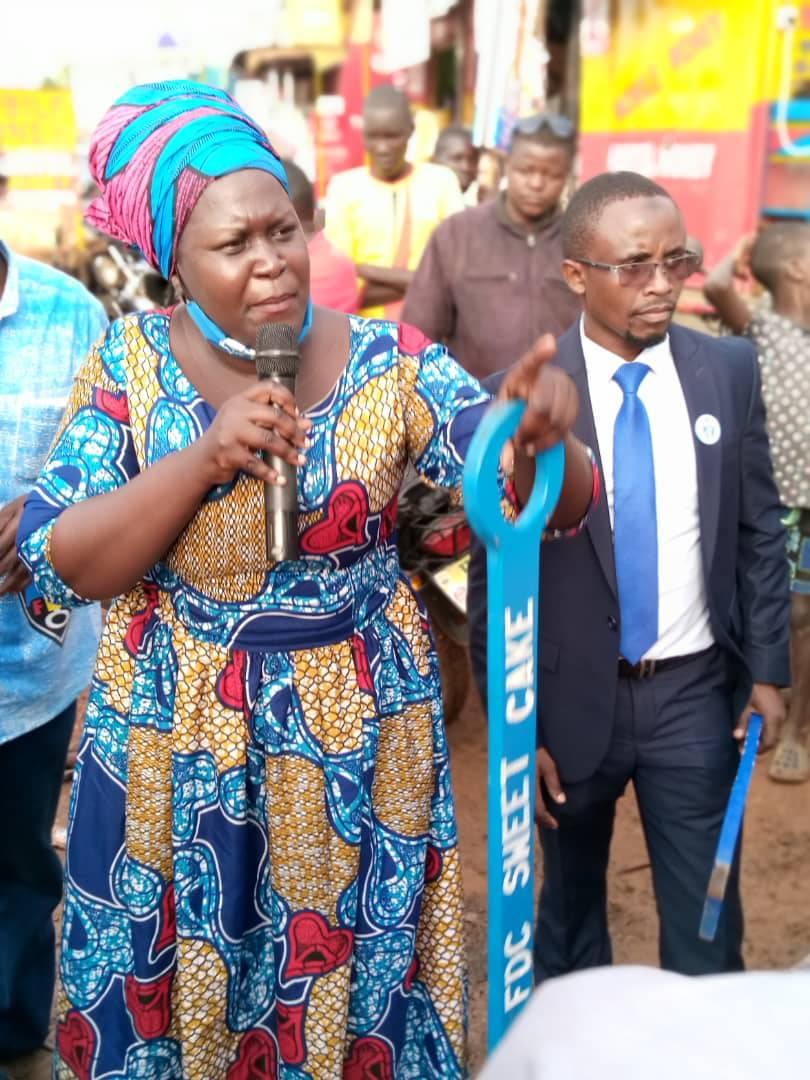 Do you feel you have to fit a certain frame to be viewed as someone worth running for political office?

Ms Achom: As a young woman, there are thoughts that I am open-minded towards. I am a feminist. I don’t have criticism over people’s choices. I am comfortably able to look for votes from a sex worker and recognize her job. But the realities in our communities are different. Even how you dress when you go out to look for votes is already an issue. This creates uncertainty as an individual.

Dr Nyanzi: I am one of the loudest women I know in Uganda. People want me to tone down and speak sweetly. They say Nyanzi is vulgar. Because I once led a nude protest, they say make sure Nyanzi comes well dressed. Yet on normal days, I wear long clothing that covers my ankles.

I have found myself kneeling down to everyday men in the market and sometimes playing the stereotype we are talking about. Another issue for me is the security of women politicians, especially those in opposition. Who thinks about the security of a woman politician and if she is able to return home safely at night. Every Thursday, I have a programme on Bbaba TV, which runs from 10:00 pm to midnight, and I keep wondering about my safety.

Ms Achom: It is disrespectful to a candidate that the whole issue of who they are and what they do affects who they become.

To Dr Nyanzi: You have received a lot of violence from online platforms. Would you say this is because you are loud?

Dr Nyanzi: Men don’t like loud women. Somehow, they look at us as a threat. When we open our mouth to speak, it is because we have an opinion and we demand to be noticed. Part of the violence is because men are threatened by women who dare enter the political space. They think women are taking power away from them.

On many platforms where you have appeared—social or mainstream media, would you say you have been marginalized by the questions they’ve asked you? How would you rather be portrayed as a woman running for political office?

Ms Achom: Luckily for me, I haven’t received a lot of backlash from the media. But oftentimes when I appear on panels that have both men and women, there is more emphasis given to the men because most media in this country is male-centered. This is also what happens on the campaign trail. I want to be viewed not just as a woman, I want to be portrayed as someone who has a voice. Listen to what I have to say, don’t look at the body. Focus on what I am offering and not how I look.

Dr Nyanzi: Suddenly because I am over 40 and contesting against women who are younger than me, they make it look like we are generations apart yet most of these people are just a few years younger than me. Many times, I have been sidelined because of my age. When I appear on panels and a difficult question is asked, men on the panel then remember I am a lady and say, let Dr Nyanzi take the ladies’ first prerogative because they often don’t want to speak about difficult issues.  Also, many times I have insisted on getting questions well ahead of media engagements and censoring some questions. Because I work with LGBT communities and sex workers, these have tended to be used against me by conservative media platforms.

How do we change the status quo as you campaign to get into political office?

Ms Achom: As a feminist, I come from a background of movement building and anger is a good thing. I cannot change my situation if I am not angry. I therefore want to say, resist and be angry until you get what you want. We want to be more organized in the political space. It is going to be a process but we cannot fail to see and believe the future. Resist, be angry, and take charge.

Dr Nyanzi: It requires a lot of work to make the political spaces women-friendly. Wherever they are, people will feel my saltiness. I salt up spaces. If I am entering politics, they will feel my salt. If I am entering media spaces, the salt will come with me. There are many ways of being tactful. One way is to educate the ignorant. Public media should come up with ways of dealing with all genders.

(Photo credits: Campaign teams of the candidates via social media)