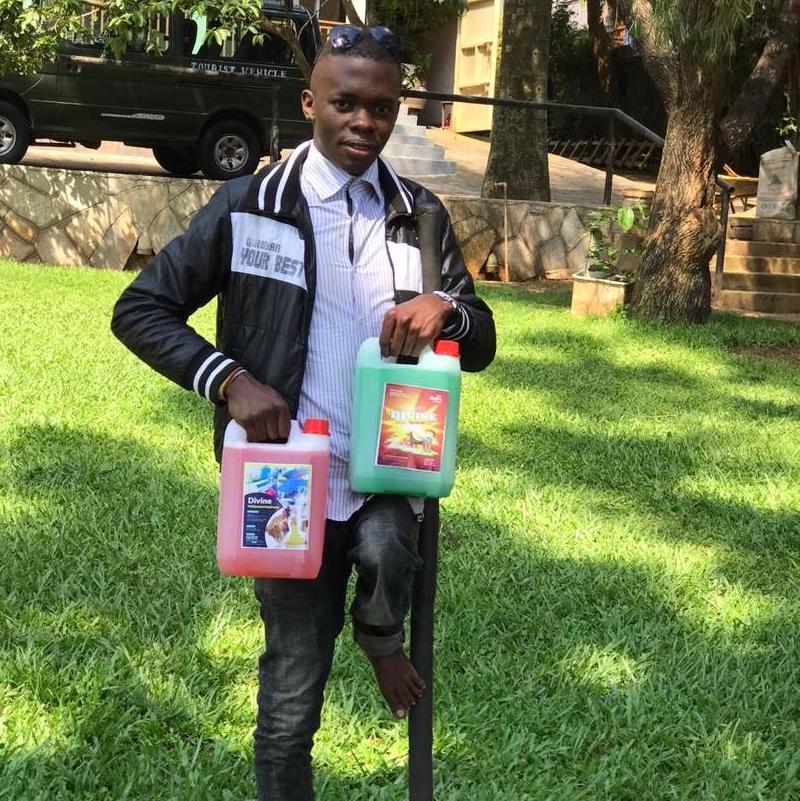 Disability is not inability. If not anywhere else, this slogan should work on the internet and more specifically social media. Online, the ground is leveled; at least that is how the 24-year old Nelson Bugembe, who lost a leg as a toddler to an immunization gone wrong, thinks. “I sell liquid soap and dog shampoo,” he says. “Social media is my marketing ground.” Sadly, Bugembe’s marketing ground has systematically come under attack from the government.

For example, the January 2021 polls in Uganda came with internet interruptions; the first was the shutdown of social media platforms, and next came a total blackout on the internet for about a week. To this day, Ugandans can only access Facebook through Virtual Private Networks (VPN), and even then, the internet, in general, remains painfully slow. “I am afraid!” Bugembe cries out. “I have one leg, just one leg, how am I going to market my soap when I can’t walk long distances?” During the internet blackout, a frustrated Bugembe, an Information Technology (IT) diploma holder, sought advice from an acquaintance on ways forward.  “I felt like quitting this project and focusing on my IT profession,” he states. “However, my colleague told me it’s better to carry on because however qualified I may be, most of the organisations do not prioritise people with disabilities.

”Days without internet meant that he had to walk and try to make door-to-door sales, which awoke a pain in his other leg. “The pain was too much; I was admitted at Corsu hospital on Entebbe road,” he narrates. “The doctors there advised me to find a job that is convenient for my health and involves minimal movement.” Almost silently, he wonders, “But where is that job?” If he had both limbs at least, Bugembe believes he would have had more clients, thus rendering his need for a job unnecessary.

“When I started this project, my market was social media, at least I can market my products online,” he tells of his business journey. “I started pushing the with help from friends and some people with huge followings on Twitter (influencers).” He sent messages to some influencers, introduced himself, and luckily, they offered to market his product for free. As people’s timelines got flooded with messages about Bugembe’s products, now called Devine Detergents, not only did he get more customers, but he also met another generous person. He calls her his Godsend. Zaina Abeja, the founder of Zapah International, dealers in industrial chemicals, reached out to Bugembe and donated 100 litres of liquid soap-making chemicals. “She also offered me free space at her store in Arua Park in the heart of the city,” he recalls. “This was really helpful because I was operating from my very small room in Rubaga and barely had space.”

Asked why she helped him, Abeja said that posts about him kept appearing on her social media feeds, and when she clicked on his account, she was inspired by his zeal. “I saw a young man who despite his disability was trying to make it in life,” she recalls. “I knew I had to help him.” She further said, “I didn’t plan on giving him the address at first, but I saw how straining the location was on him, so I offered to help.”

Life was getting better, Bugembe who could barely sell a 20-litre jerrycan of his detergent, was now selling three. “I sell a litre of liquid soap at Shs3,000 while a litre of dog shampoo goes for Shs10,000,” he says. But with the January disruption on the internet, his plans to grow his customer base came crumbling. “When the internet was off, I couldn’t post my products and therefore I had to wait for the old customers to reach out again,” he says. Even worse, Bugembe started to dig into his capital as this is his sole source of income.

When the government switched the internet on again, it was evident that the number of people online was low. The young man whose parents are both subsistence farmers in Lwengo District, where he hails from, is afraid that the city will become impossible if these disruptions continue to happen. “When I came to this city, I was homeless and had to sleep at the Miracle Center Cathedral on a bench,” he remembers. “I need this business to work out or else I will be back on that bench, or return to my parents who equally have nothing.” Despite their efforts at ensuring their children access education, Bugembe’s parents cannot afford the high cost of tuition. In fact, he had to take on odd jobs to survive and pay for his IT diploma at the Kampala International University.

Should all go as planned, he hopes to help people with disabilities access opportunities for work through the internet, hoping that the government does not continue to cause further disruptions through shutdowns. “I want to appreciate the internet because if it was not for it, I would not have achieved anything,” he says. “Look at all the celebrities I have met, it is because of my consistent posts about what I do.” Indeed, Catherine Atwane, a social worker with Opportunities for All, says that Bugembe’s motivational speeches caught her eye too. “He is so passionate about work and ensuring people with disabilities do the same,” she says. “In a way, he has mastered the art of using social media to brand himself.” Atwane agrees that with the internet off, he must have been affected. 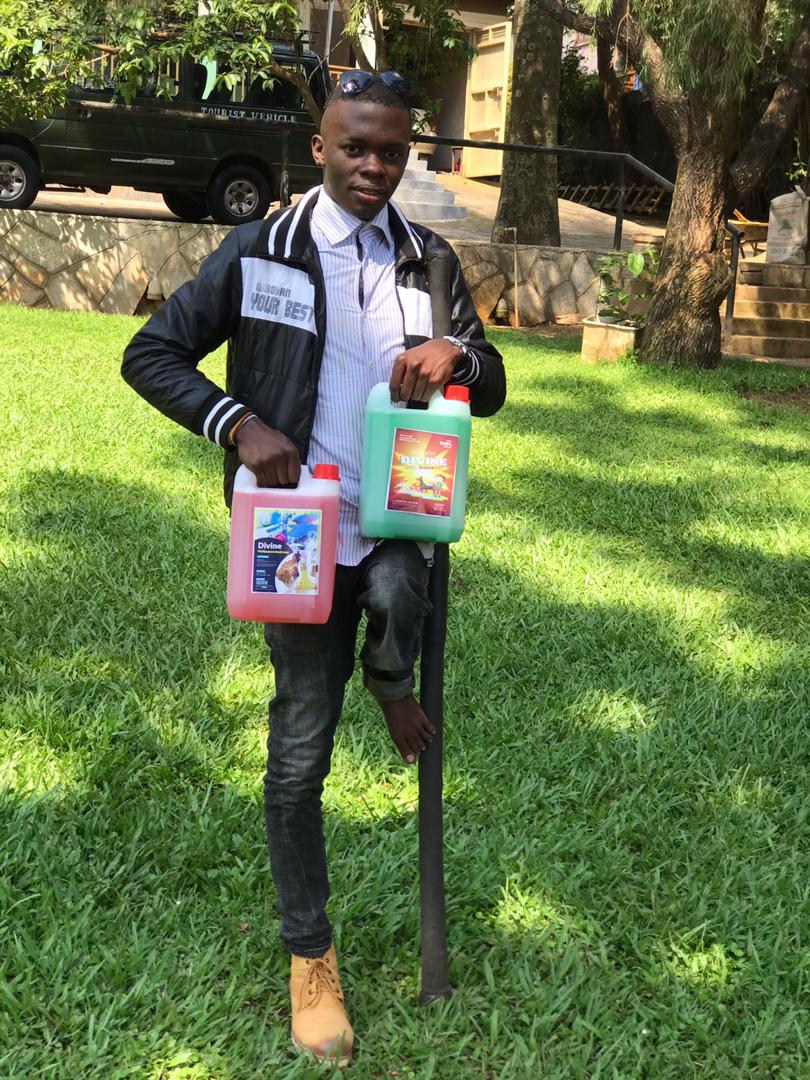 Nelson Bugembe uses social media to market his dog shampoo and liquid soap. It is the easiest way he has been able to reach his clients. Photo Credit: Nelson Bugembe

Access Now, a digital rights advocacy organisation, argues that switching the internet off shuts out many pertinent entities. “Government watchdogs, civil society members, and the press need access to the internet to protect people and let the world know what’s happening,” they wrote.

Regardless of motive, they argue that shutting down the internet silenced millions of people, deprived them of connecting with loved ones, prevented access to education, jobs, and religious practices. According to Uganda Communications Commission, there are at least 20 million internet subscribers in the country, with a significant number of these also on social media platforms. This has not only boosted e-commerce but also provided livelihoods for many. Shutting down the internet directly affected many livelihoods both directly and indirectly.

On the days when the internet was off, for example, Rapa Thomson Ricky, the co-founder of the app-hailing motorcycle company–Safe Boda spoke to the East African newspaper: “We are small companies, just waiting for when the internet returns, and we can’t be sure when that will be. Even if we are making Sh50 off each transaction, the cumulative effect of this gets big over the number of days we are not running and our riders are not able to earn,” he said.

Netblocks, an organisation that monitors internet freedom, estimates this year’s loss on the country’s economy at $9 billion. Even worse, Uganda’s Financial Technology and Service Providers Association reported that companies in the sector lost about $17million each day the internet was off.

The cost of shutdown

In 2016 when social media alone was shut down for two days, the country lost $2million. Nestled somewhere in figures like this are people like Nelson Bugembe, who beat the odds to survive every day. “My message to government is how I wish they could think about us also,” he says. “I know we have Members of Parliament representing people with disabilities, where are they when we need them?”