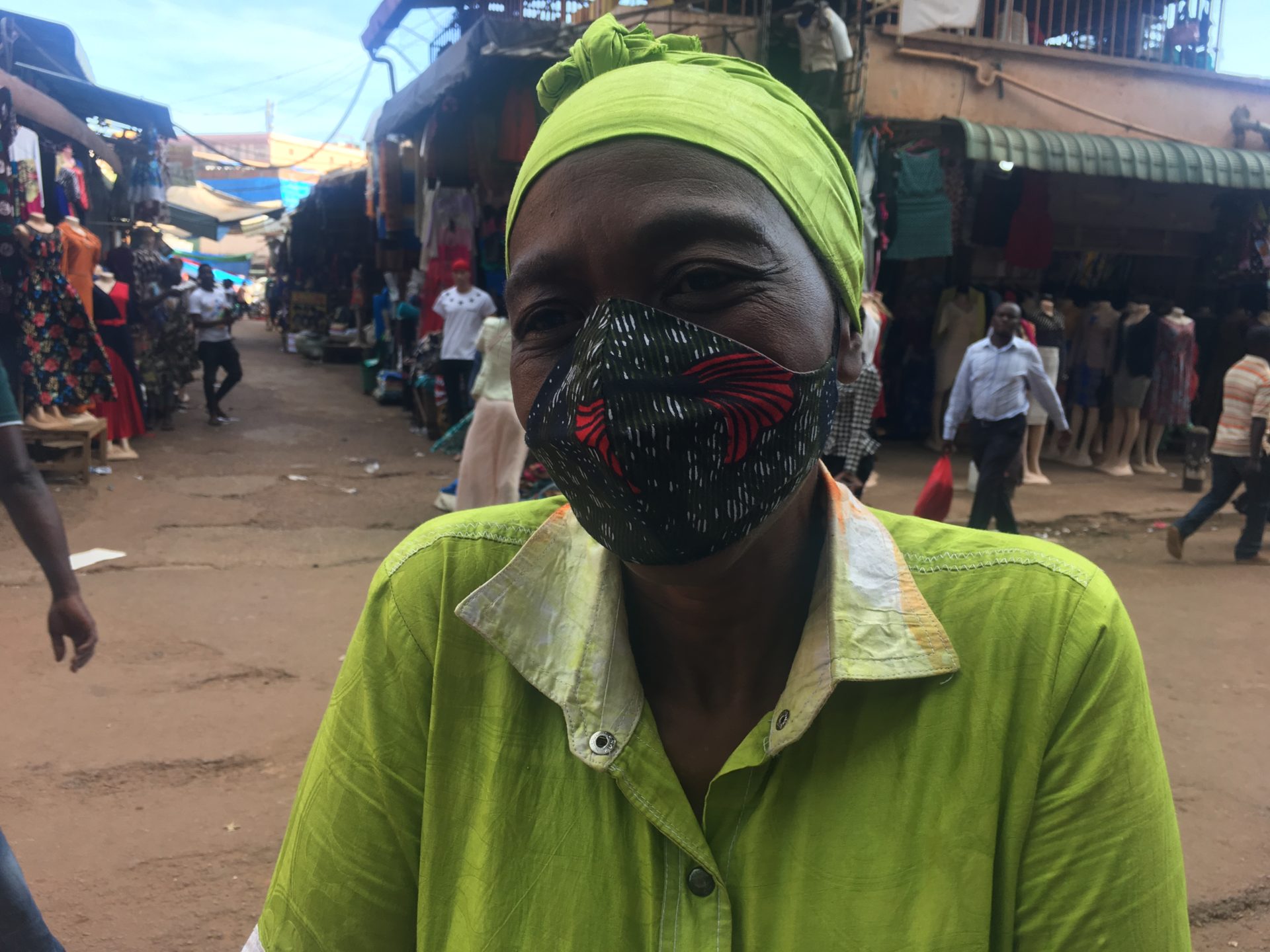 Kanyere Mwenge is a Congolese refugee. She hails from Goma, in the Eastern Democratic Republic of Congo. But she has called Uganda home for the past 10 years. Before insecurity pushed her away from her home country, she used to run a hardware shop. It offered a decent source of living for her. Then in 2011, she had to leave it all behind, to find refuge in Uganda.

In Kampala, life was not easy either. To survive, Mwenge set up a small shop with the little money she had. She sold mostly cosmetics. But when COVID-19 hit the country in March and a lockdown was imposed. She lost everything. “All the cosmetics expired; I had to throw them away,” she says.  Mwenge has resorted to renting out the shop as she has no money to restock it. She is also making and selling masks to feed her family. During the lockdown, her family was able to survive on her little savings and the food distributed by the government to support urban poor dwellers who were facing starvation because of restrictions on movement that the government had imposed then.

Although the restrictions have been eased in recent months, Mwenge is struggling to revive her business. Beyond the lockdown, many refugees, especially in urban areas who often do not get financial support from humanitarian agencies continue to struggle every day.

Uganda is host to over 1.4 million refugees spread across the country. Most of the refugees are from South Sudan, the Democratic Republic of Congo (DRC), Rwanda, Burundi, and Somalia. While some live in designated settlements where they get food assistance, others like Mwenge have opted to live in urban settings where they support themselves through small income generating incomes and through family members living abroad. “We are just surviving; if I get money, I will work properly, revive the business and be able to care for my family, afford to buy food, and get school fees,” says Mwenge.

Muvuya Kasereka, one of the refugee leaders in Kampala says the disruptions to day-to-day life brought about by the COVID-19 pandemic has created an even bigger challenge for urban refugees.“There was an increase in hunger within families due to a decline in income and reduced food availability,” says Kasereka who has lived in Uganda for 10 years now and is a volunteer head at the Urban Refugees Rights Programme (URRP), a non-governmental organization that works to ensure a better life for refugees.

Most refugees in urban areas often depend on selling their labour for day-to-day wages while others are engaged in running small businesses for survival. But when a lockdown was imposed and trade disrupted, many struggled to get by. “Also, the money we use sometimes comes from families and friends across the border. But with borders closed at the time, we could not access this source of income. Poverty levels among refugees increased and malnutrition was high,” explains Kasereka.

For Joseph Adison, a refugee from Sudan, the pandemic came with the loss of economic opportunities, which also meant the loss of income. He has had to rely on the financial support of friends and family to get by.    “There were so many challenges during that time. There was no source of income, there was no work,” says Adison.

Just like Adison, many young urban refugees were not spared. “The lockdown period was a terrible time to live as a refugee. I never thought this could happen to me. Many urban refugees could not afford to pay rent, and many young girls got pregnant while the young men and boys resorted to taking drugs,” says Morgan Paluku, a 20-year-old urban refugee. Paluku says organizations such as the Jesuit Refugee Service (JRS) provided help to many refugees, together with the free food rations that the government distributed to all urban poor residents. Although Paluku has skills in graphic design, he says he has been unable to find employment. “I have skills in networking and graphic design, but I don’t have any startup and job,” explains Paluku. But better still, he would like to see refugee organizations and the government offering support to skill young refugees. “We have a lot of ideas that we can turn into jobs with the right support,” he adds.

Zaituni Lugano, 29,  lives with her four children in Kampala while her husband is in the refugee camp. During the lockdown, she says she struggled to pay rent and her landlord threatened to throw her out. Buying food became expensive. She was in debt, she borrowed to survive from neighbors.  To survive in the city with her children, Lugano also sells jewelry. She picks it from a shop owner, sells them, and is given pay for the day. She hopes she can raise capital to start her jewelry business, take care of her children, and live a decent life. 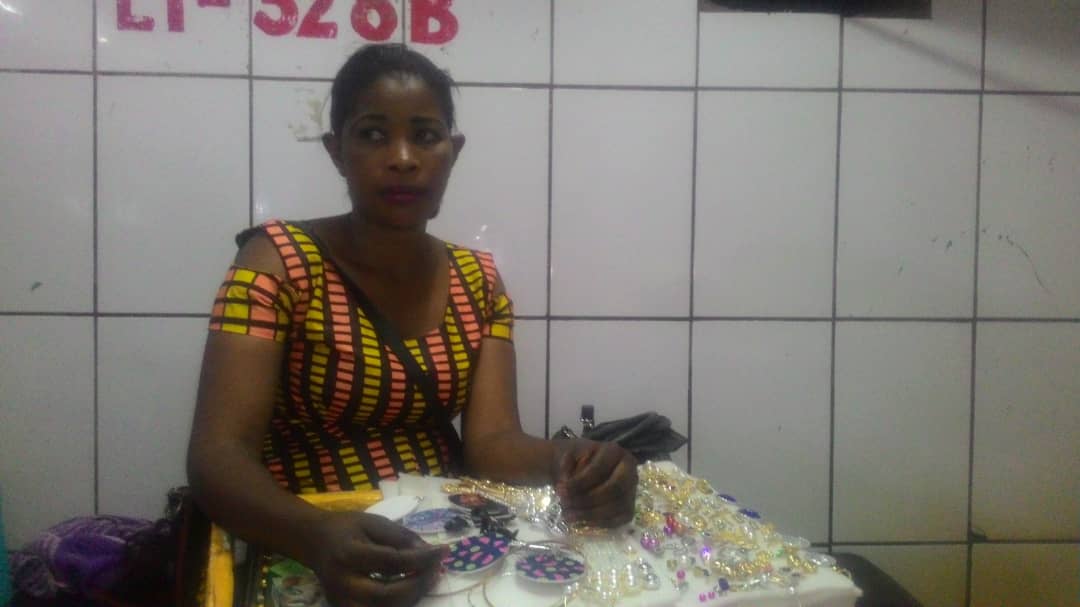 Zaituni Lugano is an urban-based refugee from the Democratic Republic of Congo and hawks jewels in the city.

Japhet is another urban refugee in Kampala. He is shy to disclose his second name, as I stop by him selling face masks in downtown Kampala. Perhaps in his 40s, he says the business he is doing currently is embarrassing for a man like him who has a family to take care of. “Life is tough,” is how Japhet described his life as an urban refugee trying to make ends meet in the city.  The father of six children and a wife has lived in Kampala for three years now. He fled his home in Beni in the DRC when killings started.

Back home, he was a businessman but once in Uganda, he was simply a refugee and support was from the camp where he first arrived. To forge a better life, he found his way to Kampala with his family. He tried his hand at business, selling different sorts of merchandise. But when COVID-19 struck, he got stuck.“Now I am selling face masks. I sell masks at sh1,000 but people still come and bargain, how can I make enough money? I make money only to eat and for rent,” Japhet laments. But Japhet was lucky to get food aid that was being distributed by the government to Kampala residents during the COVID-19 lockdown. He also remains hopeful about life post-COVID-19. “If I can make enough money from selling masks or get financial support, I could try my luck at other businesses and try to secure a decent life and future for my family,” he says.

Leoni 25, a single mother of one has had similar challenges trying to make a living. Before the coronavirus pandemic, life was fairly good. She used to sell jewelry within the city centre. But when the lockdown was imposed, she found herself struggling. She did not have sufficient money. “I stayed home with my child. The father abandoned us when I got pregnant.” Luckily, she benefited from the food aid from the government for Kampala residents. But she would also borrow money from friends to make ends meet. When some normalcy returned, she got back to hawking jewelry.

Leoni picks the jewelry from a shop owner, hawks it, and at the end of the day takes money made back to the shop where she is paid between sh10, 000 to sh20,000 for the day. “But sometimes you fail to make sales. When you go back to the shop after two days, there is a lot of mistreatment and threats from the owner of the jewelry but I persist because I have to survive and take care of my child.” “I just need to get capital to start a business of my own. That way, I will be able to take care of myself and my child without so much pressure,” Leoni says.

Where can a solution come from?

On Sunday, June 6, 2021, the President announced new partial lockdown measures in the country, including the closure of schools and inter-district movement. The measures are aimed at addressing the resurgence of COVID-19 cases in the country. Kasereka says part of the answer lies in strengthening startup businesses owned by the urban refugees and other vulnerable groups. “I don’t believe in handouts and paying rent for people. After one to three months of paying rent what then happens? The best thing to do is strengthen business startup interventions and uplift medium and small businesses of the vulnerable,” he says.