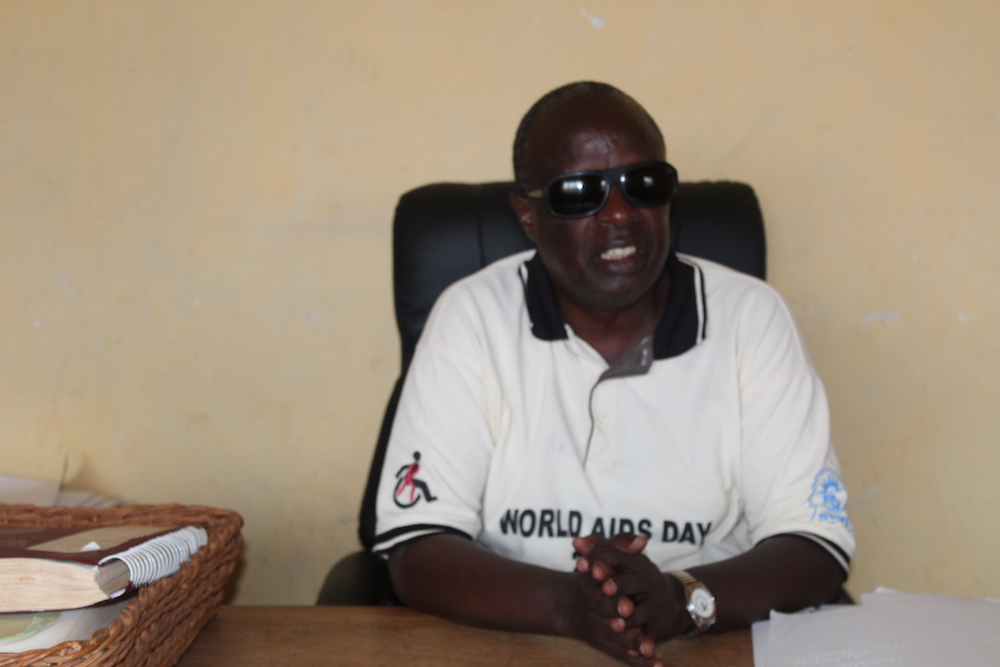 For Kinubi Francis, head teacher and co-founder Salama School of the blind, getting blind was the best thing that could have happened to him.

Born to nomadic pastoralists in Mbarara, he lost his sight when an outbreak of measles attacked his village leaving him completely blind. 55 years later, he considers his blindness a privilege because it has led him to achieve more success than he would have if he had remained sighted.

“I think I was privileged to get blind. It led me to go to school. If I hadn’t gone blind, I would have become a cattle keeper, like many children of cattle keepers. Many of them do not want to take children to school because they wanted them to look after cattle. I accepted my blindness. I don’t compare it to any other thing. Because of going to school, I have become a public figure, a position I would not have attained if I were a herds boy.” He says.

Because his parents constantly relocated to other villages, their life growing up was not good and stable. As a result, his mother was away when he ailed with measles in present-day Kiboga and therefore could not tend to him. By the time she returned, his pupils had blown due to the intense heat in his eyes from sleeping too much. He was rushed to Mulago where his fate was sealed.

“The doctors told my mother, who was very interested in my future that my sight was completely gone. My father was apparently not interested in my future, he was an ordinary cattle keeper, milking his cows and drinking from morning to evening. Whenever he drunk he would make us fly like chicks. They advised my mother to focus on education for me. She could not believe that a blind boy could go to school so she thought they wanted to take me away and eat me. She first refused but as we kept going back to the hospital, they eventually convinced her to let me go to school. She agreed because I was of no use at home. My mother said, “his father beats him because he cannot look after the cows or go to graze”, instead of continuing to see me suffer like this, she allowed me to go to school.”

In 1964 Francis was taken to St. Francis School of the blind in Soroti district, Madera and in 1975, he became one of the first five blind children to start the present day unit for the blind in Iganga Girls School. He then went to Willis College, a teaching college in Iganga setting the record as the first blind student to be admitted to a teaching college. Not everyone was in support of his advancement and extraordinary academic achievements, however. The National Institute For Education resisted his joining of college as a blind person because they did not see how possible it was for a blind person to become a teacher.

“I took them head-on. As much as they resisted my studies, my tutors supported me and I also brought in other human rights organizations to help me. My results were good but when I was about to sit for my last exams in 1981, the body wrote a letter barring me from sitting for the exams.”

As luck would have it, Kinubi obtained the favour and support of former president, Milton Obote who had his case investigated. After this encounter, he decreed that no Ugandan student should be stopped from pursuing education as long as they go through the normal procedures. This opened the gates for all other blind students to join the college. In 1982, he sat for his written exams, which he passed highly. He was posted to Madera school for the blind in Soroti where he taught until the guerilla war by the NRM. He then transferred to Mbarara and joined St. Hellen’s Girls school in 1984. In 1991, he transferred again to Mukono, at Nakalanda Primary school and in 1996, he enrolled for higher education at Kyambogo University.

Alongside teaching, Francis has also been deeply embedded in the advocacy world, promoting rights of the blind in Uganda.

“I became a leader in the Uganda National Association of the Blind (UNAB) where I served as a representative of the Western region, then general secretary and later chairman from 1997 to 2005. I served for two terms. When my second term at UNAB neared its end, I quickly stood for leadership positions in the National Union Of Disabled Persons of Uganda (NUDIPU) and in 2003, I was elected chairman of the board, where I served up to 2013 when my term ended.”

Salama School For The Blind Salama School Of The Blind was founded in April 1999 with a vision of bringing services nearer to parents of visually impaired children. Originally, it was a centre opened in 1960 by the Uganda Foundation for the Blind in the colonial era for the rehabilitation of the adult blind. In the 70s however, with Amin’s expulsion of expatriates the centre started deteriorating that by 1990, it had completely collapsed. This happened at the same time community-based rehabilitation was taking hold, where people who got blind later in life were rehabilitated within their communities and families because when they were taken to centres, they would return to find their homes disintegrated, their land stolen and families are broken. For a long time, nothing was going on at the centre until 1999 when UNAB identified it as the perfect place to set up a school for the blind in the central region.

“There was no school admitting blind children in central Uganda at that time. The parents who could afford had to take their kids to the east and west as far as Kabale. These places had schools as early as the 60s. The question was what happened to the children to whose parents could not afford to send them to such distances?” He continues.

Having just completed his studies at Kyambogo University, the board of UNEB proposed that he start this school, which would help blind children in central Uganda.

Francis also sought to represent disabled people at a higher level when he contested for a parliamentary seat twice in 2006 and 2011 for the western region, losing both elections. He attributed this to a lack of trust from his people for a blind man to make a good leader.

Because of dwindling government resources and lack of support to people with disabilities, the school survives on the kindness of friends and donations from corporate companies. “The Rotaract club of Mukono are our friends, the boy’s dormitory had lost almost all the louvres, and they promised to change the structure of the windows to these wooden ones. They will be coming tomorrow to visit the kids too,” says Francis.

He attributes the poor government support to corruption, poor prioritization and lack of implementation of policies and laws.

“It is failing because of the government’s resource envelope. The government has priorities like roads and dams, therefore, the resources for other areas like education are minimal. Secondly, there is a lot of misused resources in corruption and bribery. The government may be looking for money to buy machines but there is no money and even when there is money, the ministry could buy 100 braille machines for the blind but only 10 will reach,” he says.

With the knowledge that the work that he and fellow teachers at the school for the children, Kinubi knows that blindness will not be the end of their lives. He calls upon parents and communities that have blind children to take them to school and discard the primitive notions of disability being a curse or a result of witchcraft. He calls upon policymakers to direct more resources to people with disabilities.

I would like to contribute to the Salamo School for the blind. Please inform me as to how I can assist.
Thank you and God bless you.