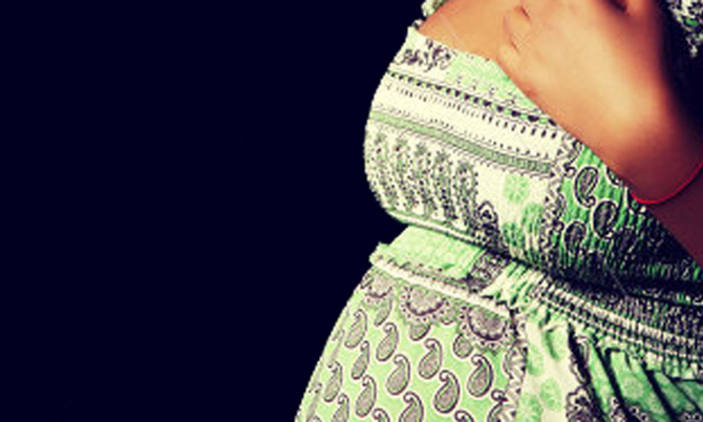 Sixteen year-old Emily* believes fashion and design is her only hope for a better life with three-month-old baby, Precious. At the end of 2017, she became homeless in Kampala after her grandmother kicked her out of the house in the western town of  Fort portal. Emily’s fault was the fact that she was pregnant. Her grandmother already struggling to take care of Emily and her siblings could not imagine adding one more person.

At fifteen years, Emily had only been in a relationship with a nineteen year old neighbour for a few weeks and her first sexual encounter resulted in a pregnancy.

“One day, I just started feeling sick. I couldn’t bend and I was vomiting all the time. Jajja touched my stomach and told me to open my mouth and put out my tongue. She looked at me and told me to get out,” Emily narrates.

Confused and scared, Emily left her grandmother’s home and spent a night  on the street before boarding a bus to Kampala the next morning using some money she had picked from the house. In Kampala she went straight to Rubaga miracle centre, an evangelical church where she met a woman who got her a job to work as a domestic worker in Rubaga. Her body was fast changing and she did not understand why, she was not aware she was pregnant until her new boss explained it all to her.  At this point she was four months pregnant.

Emily is just one example of millions of adolescent girls who pay a high price for being raised with no information on how to manage transition to adulthood. Access to information on sexual reproductive health and rights for young people in Uganda is relatively low. Parents shy away from the topic, church leaders are vehemently opposed to sexual education while schools struggle with lack of well planned curriculum that prepares young people to deal with their sexuality.

The government’s back and forth bans on sexuality education has left a gap of knowledge in a country where 48.4% of the population is below 14 years. In a 2017 study conducted by Andre M. N. Renzaho and others, 62% of the 636 participants reported having ever had sex at the age of sixteen, an indicator that young people are sexually active and thus information and exposure to sexual reproductive health for teenagers and school going children ought to be prioritized.

Teenage pregnancy on the rise in Uganda.

In Uganda, 25% percent of female adolescents aged between 15-19 years were already mothers or pregnant with their first child according to the Uganda Demographic Health Survey in 2016. Uganda is the leader in teenage pregnancy in the whole East African region. Poverty and lack of information on sexual reproductive health are reported to be the leading causes of this predicament. In poorer households like Emily’s, teenage pregnancy is at a rate of 34% and with high rates of teenage pregnancy comes high mortality rates, spread of HIV and other Sexually Transmitted Diseases, fistula and school dropout.

The government efforts to address teenage pregnancies through media campaigns and initiatives such as the Presidential Initiative on AIDS Strategy for Communication to Youth (PIASCY), the National Strategy to end Child Marriage and Teenage Pregnancy in 2015, and most recently, the Live Your Dream Campaign in partnership with UNFPA have not registered much success with the rate of teenage pregnancy having increased from 24% in 2011 to 25% in 2016. It is evident that more action needs to be taken in the fight against teenage pregnancy especially availing comprehensive sexuality education and access to contraception for adolescents both in and out of school.

In 2016, the Ministry of Gender, Labour and Social development banned comprehensive sexuality education in schools with the argument that “sexuality education was leading to decline in children’s moral values.”  Such moves have done more harm as young people are exposed to sexuality through media, peers, communities and even schools with girls facing greater exposure due to rape, sexual and gender-based violence. In the wake of all this exposure, young people remain uninformed and ignorant on matters pertaining sexual education as culturally and religiously, sex is not a topic that is openly discussed. Early this year, the Ministry of Education and Sports in introduced the National Sexuality Education Framework which seeks to incorporate lessons on sexual reproductive health into the curriculum at all levels. This however has been met by resistance, on moral and religious grounds where religious leaders believe incorporating sex education in primary and secondary school will lead to moral decadence with evidence based research taking a back seat. any young women both in rural and urban education do not have access to education and therefore passing on this information might remain a challenge.

Emily l had never heard anything about  how one gets pregnant, especially since she had stopped going to school after primary seven.  However, she had heard people talking about terminating a pregnancy.

“My first thought was to have an abortion… I could not see a life with a child. I went to the hospital and they asked for UGX 200,000 but I could not afford it. A girl in the neighbourhood made for me some herbal medicine which she said would work. The medicine made me sick and when I went back to the hospital, a nurse told me it would be impossible to remove the pregnancy at that stage.”

Abortion is only legally allowed in Uganda when a woman’s life is at risk, this restrictive legal framework remains despite research showing  15% of adolescent pregnancies end up in abortion. This puts the lives of a great number of teenagers at risk as they resort to backdoor methods mostly recommended by peers just like Emily with tragic consequences.

Emily gave birth at Rubaga hospital in June 2018 with the support of The Remnant Generation, a home for vulnerable pregnant girls, where she stays.  Here she is learning some vocational skills with focus on fashion and design“When the people of Tenge Fashion School came to talk us about tailoring and making clothes, I saw that it was something I could do. Now I want to be a fashion designer because I know it can make me a successful person. I am learning how to make clothes and I believe that by graduation in December, I will be very good.”

Emily might have been lucky and she is able to get training but without proper education on sexual and reproductive rights, she like many young women in uganda remains vulnerable.

Bringing information on sexual reproductive health closer to young people all over Uganda through school curriculum, youth groups, guidance and counselling sessions, media and deliberate effort to implement the newly introduced national sexuality education framework will greatly reduce girls’ and young women’s exposure to early pregnancies by giving them the necessary knowledge on matters regarding the changes they will face during adolescence and how they can deal with them.

*Names have been changed.