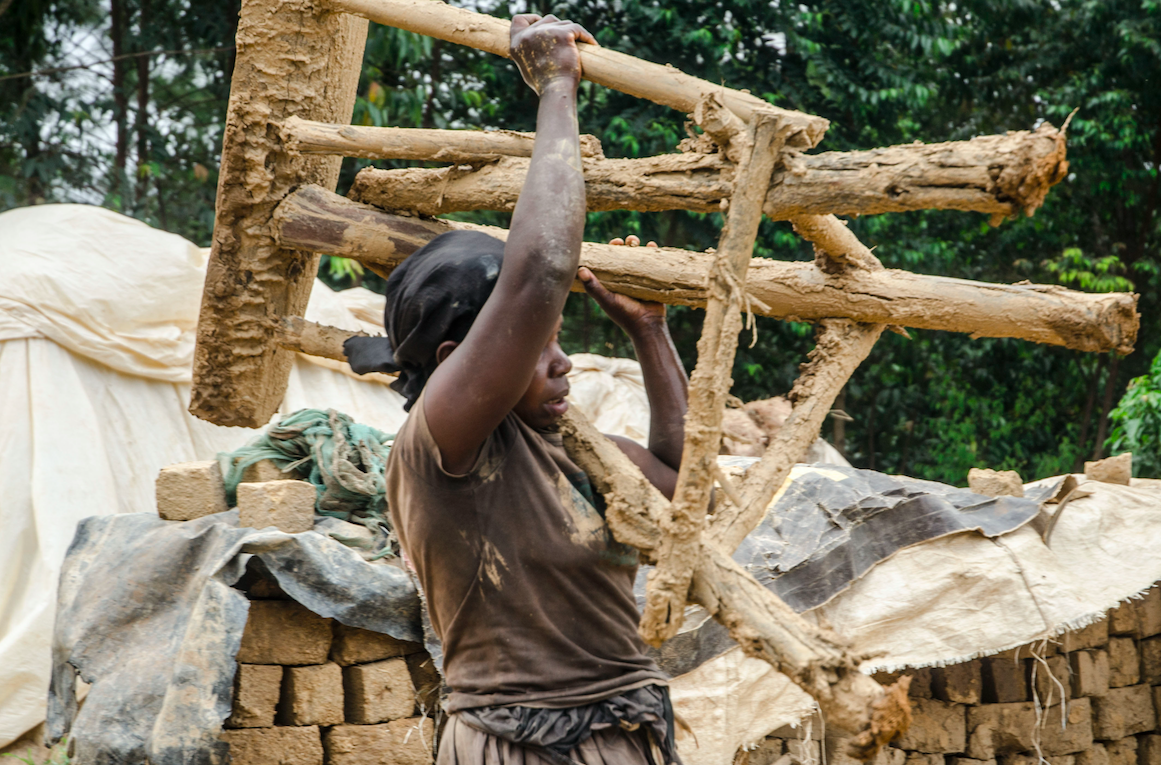 As a young adult, Edith Nakimbugwe’s parents advised her to find a husband, have children and be a home maker instead of looking for a job. She took on this advice however, after giving birth to their first child, her husband who was still a student was not earning any money to look after his growing family. She had to step in and fill the gap, which is how she begun her brick laying business.

Edith is now a mother of five, residing in Buloba, Wakiso district and a seasoned brick layer, despite the fact that she is constantly ridiculed for doing a job that is stereotypically, a man’s.

Edith started laying bricks in 1993 at the age of twenty, when she failed to get the office job she had studied for at Nakasero college. With a baby on her hip and an unemployed husband, she had to find a way of bringing food home and supporting her family. In the beginning, her peers sneered at her for doing a man’s Job. The villagers wondered why she had studied a business course in the first place only to end up doing menial work. Before completely immersing herself in the dirt and mud of brick laying, she had tried her hand at selling charcoal but the profits were meagre and could not sustain her family. Poverty soon crept into their home like a thief in the night.

“I couldn’t live like this anymore, one morning, with all the determination in the world, I woke up and started making bricks.”

She embraced the hard work that this job would call for and set to building her first kiln.

“On a typical day, I walk to the clay mine, dig the clay out of the ground, mix it with water until it is well dissolved. I then pound the clay until I feel that it is smooth enough then start putting the mixture into the brick moulder,” she narrates her process of brick making. “I then cover them with a kaveera (polythene  bag) such that they dry well before putting them in a kiln. After building the kiln, I let them burn overnight until they are hard enough to be worthy of building a house.” She covers the bricks with a large polythene bag to ensure they dry. Large logs of firewood are used to burn the moulded soil into bricks firm enough to build a house. “When I have made my bricks I know that I will get clients. That is money for me and my kids,” she says confidently.

It’s been twenty five years since she started this business. With the profits from the brick laying business, she went on to buy a farm in Kakira to grow coffee, bananas and beans. She has also been able to build some rentals that provide her with a monthly income. Edith takes pride in having ventured into brick laying as it supports her family and enables her to single-handedly pay school fees for her children, despite the challenges it brings.

“I get despised by other women, they call me a man. Many times, they have told me to quit my job and join another job that is more fit for women,” she says. “I hope this inspires other women to get up from their worries and move on.”

Through the mud, heat and ridicule, Edith has raised and educated her five children with three in secondary school, one at the university and the oldest, a graduate from Makerere University with a bachelors degree in Tourism and Travel.

Edith Nakimugwe is blazing the trail. She has trained three women in brick laying who now work with her.

“People still laugh at us now but seeing what I have been able to reap from my job, I am not about to give it up. It is important to let women do whatever job they want to do,” She says confidently. “I am planning to have a bigger land to be able to make bricks, just like Uganda clays, with trucks transporting the bricks from other places to one central place.”

As she grows older, she believes that a brick making machine would come in handy to lessen the physical effort needed and increase the number of bricks she makes.

“I love this job so much, it has been my livelihood, I have never looked at it as a man’s job. In Uganda we women a lagging behind yet we have lots of responsibilities.  For me, I choose to do this job because I need money, lets not sit and fold our hands. This is my office. It is the only Job that gives me true joy.”

All Photos By Katumba Badru