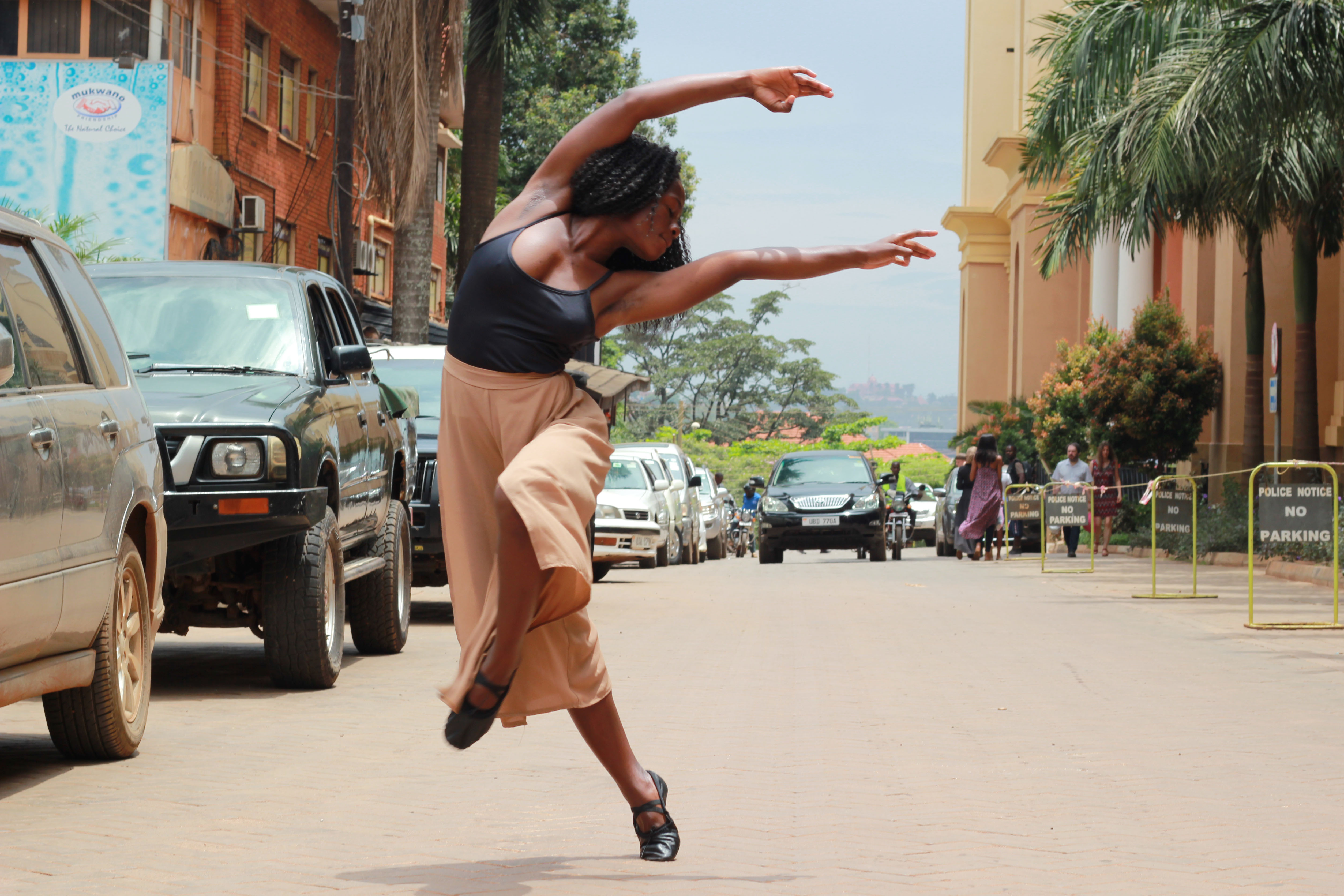 “I don’t have any Olympics dreams, they are way out of my reach. I don’t even know how to get there. These things need money. I don’t have that kind of money. I would need a professional coach that cannot I afford.” Nanozi said opening her doubtful eyes wide. “Look here, the diet during the competition season is very expensive.  Breakfast is specific, lunch has to have broccoli, lettuce, black pepper- these are luxuries that I don’t eat on other days.” She says with a smirk on her lips.

In view of the present circumstances, her doubts are justified.

Nanozi Lydia is a 25-year-old graduate of Makerere University from the Department of Performing Arts. She is a contemporary ballet dancer with the Stingers Uganda dance group and the reigning Miss Kampala Fitness and Bodybuilder.  She gave in to her friend’s and the man that would later be her coach’s encouragement to start bodybuilding because that way she would earn some extra cash from both dancing and bodybuilding.

“My coach watched me do my ballet dance thing and he asked my friends to encourage me to be a muscle and bodybuilder, I was kind of hesitant.” She says

“I met Lydia during a bodybuilding contest, she came as a dancer, as she was performing on the set, I saw some other talent, she could be a bodybuilder. I sent her friends to get me her number, she was suspicious, she was hesitant because she wondered what a man like me wanted her number for. I explained myself and after so much persuasion, she decided to visit my gym – ISK Fit for Life gym.” Her coach says.

In 2017, she hit the gym and Kenneth was willing to train her at no cost.

“My coach is my trainer and nutritionist. He makes decisions for me. He will guide me on whether I should contest or not and I can’t risk going against his word because I might go when I am unfit and collapse on the stage.”

Above all the obstacles, her parents do not believe in her dream as they would rather she has an 8 to 5 job.

“My parents don’t believe in what I am doing. They want me to hold an office job like many Ugandan graduates- that is what makes them proud.” She says.

I ask her if this had changed after she won the Miss Fitness Kampala contest,

“They were happy briefly but soon the pressures of getting a real Job soon started. Moments like these make me want to give up but what keeps me going is the fear of begging and being dependent on anyone else.” She said.

Her coach too is not about to give up on her;

“It is not easy to train adults because they are destructed by many things but Lydia was different – she was open about her life, she is very disciplined, she is resilient, she is brave-a key ingredient to body building- she is a lioness at heart- she is a strong woman and very independent.” Lydia’s Coach said.

As we chatted away, the case of the American gymnastics team doctor that abused girls came up, I asked her if there were sexual harassment cases in this vocation. “The men we meet in the gym harass us. One day at the gym, I slapped a man for touching my buttocks. The men that witnessed this defended him and said they would report me to my coach. When the coach arrived, they told him that I had slapped a man. He was happy that I could defend myself. He warned all the boys in the gym never to touch me again.”

Nanozi reckons that sexual harassment comes from men thinking that they own women’s bodies.

“These boys grow up thinking that a woman is supposed to make tea and kneel to serve the man. They are nurtured to think that they own us, so when they don’t get us, they want to grab us by force. They want to grab us in the most uncouth way.” She says with a nod of emphasis and gesturing a folded clenched fist she said: “But I fight back.”

She doesn’t want me to judge her as rowdy so she informs me that bodybuilders are trained to be disciplined. But when men heckle and hiss she walks to them and asks them why they are hissing at her. “I look into their faces and tell them to stop it.”

Are there any government programmes to support body gymnastics and bodybuilders in Uganda? I ask.

“There are no programmes. Look here, we cannot compete with the Kenyan women bodybuilders, they have support from their government.  My friend Irene Kasuubo, the Miss Kampala Fitness runner-up, is in Austria right now competing internationally, no one cares where she is and she has not even made it to the sports page.  Ugandans are gifted but no one cares. What would it cost the government to build one small gym for Ugandan bodybuilders?” She asked.

“The government shall praise you like Kiprotich (Olympic marathon champion) when you win Gold at the Olympics one day.” I said.

To drive the point home, her coach said,

“Our government is not supportive of sport, whichever sports person you are, you have to stand on your own. Myself, I don’t have the finances to take her to the next level- If she could get someone to finances to support her dreams- I am certain that she would compete internationally. She is really good.”

Ugandan athletes have in total won seven Olympic medals since 1956 when Uganda first participated. Every summer, except the one Uganda, boycotted in 1976, Ugandan athletes are sent to the games, those that win medals are hailed as but the government most times wants to harvest from what they didn’t nurture. It is no surprise that Lydia Nannozi does not even dare dream about the Olympics.