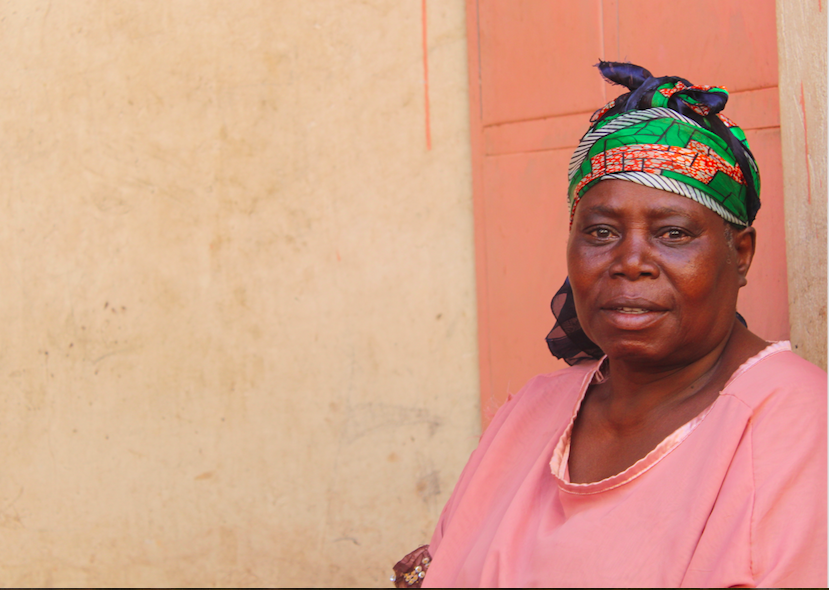 Sixty-four-year-old Apendeki Moza is one of the thousands of Congolese refugees that have made a home in Uganda. In 2015, a group of rebels attacked her at her orphanage in Maniema forcing her to leave her home and the children she had loved and looked after for over a decade.

“They beat me so much. In the head and the stomach, everywhere. They beat me with the butts of their guns and threw me to the ground. I fell on a sharp piece of wood that pierced my back. Another man hit my stomach with the back of his gun, and they beat me all over and left me for dead.”

This was after the third time the rebels had come to demand for food. She stood her ground and refused to let them have it because if she had, there would have been nothing left for the children.

“They wondered why I was not scared of them, why I wouldn’t run away like everyone else. I always had a lot of food for the children so they came and asked for it,” she narrates. “I gave them the food the first time, and they came back. I also gave them the second time. When they came back a third time, I told them to come back another time because this food was for the children but they refused. They wanted to take it all.”

Apendeki had started this orphanage in her house in 2003, on returning to her home from the tumultuous Goma province to find so many children left behind by their parents.

“In Maniema, I found so many abandoned children. They had swollen cheeks and mucus stuck to their faces. They had flies all around them and had nothing to eat. People had run away. Mothers and fathers had fled and left their children behind. I also couldn’t go away and leave these children without anyone to cook for them,” she narrates. “I decided to stay and look after all the orphaned children. I had some little money which i used to buy some food for them. I also planted some food.”

By June 2015 at the time of this incidence, the orphanage she had created housed over 100 homeless children, with support from Oxfam which supplement the food and provided supplies for the children.

When the rebels had left, The older boys at the orphanage carried the unconscious Apendeki to a boat where she sailed to Kisangani and got treatment for her wounds. A devout Christian, she preached the gospel of the Good News wherever she went, and as a result, she was welcomed by people into their homes as she made her way into Uganda.

“I got to the police on a Thursday evening but they told me that they work on Congolese on Tuesday. Lucky enough, I met a man called Pastor Andre. He took me in and told me I could stay in at his church in Kawempe. A few days later I met a lady called Jamila at the church who said I could stay with her.”

Apendeki stayed with Jamila in for a year until she was, by pure chance, reunited with her daughter at the Office of the Prime Minister.

“I had gone to OPM to follow up on my file and when I was leaving, I heard a woman calling my mother’s name. At first, I ignored it but she mentioned both names again. “Apendeki Moza”. I got curious so I stayed behind and waited for her. When I saw the woman who had my mother’s name, she did not look like my mother. She was dark skinned and very small. My mother had always been fat and light skinned. I asked her where she came from and she told me “Maniema”. I asked her if she knew where her daughter was. She told me that her daughter had been taken away from Goma in 2003. After we talked I also realized she did not remember me. I told her how I had come to Kampala and we also talked about all that she had been through. We both cried for a long time,” narrated her daughter, Hellen.

Soon after their emotional reunion in 2016, Apendeki’s health started deteriorated. After several visits to InterAid and the KCCA health centre in Kisenyi, she was diagnosed with an epigastric hernia which she believes was a result of the inhumane beating by the rebel soldiers in Manyema. At Mulago, she was asked for UGX 5,000,000 for the operation, money that she has failed to raise. She goes to the nearby KKCA health centre in Kisenyi for treatment to manage her pain as she hopes for a miracle.

Kampala city his home to over 33,000 refugees in the areas of Kisenyi, Katwe, Makindye and Masajja who are most often a result of conflict in their countries. Urban refugees live in dismal conditions as they cannot afford to earn a living and in most cases, the language barrier hinders their ability to find work.

Uganda, has over the years been praised for its progressive policies on refugees and with the people’s acclaimed hospitality, it is no wonder the country hosts more than one million refugees, making it one of the countries with the highest number of refugees in the world. But what happens when these men, women and children survive their way to the capital city, an overpopulated place with its own challenges not unique to any capital city?

“When they settle in a city, urban refugees are often confronted with issues similar to what the local urban poor encounter. Yet they also face additional challenges, like adapting to a new culture, learning a new language, overcoming stereotypes, and living in fear of being returned to their home country or found and harmed by a member of the opposition from their country of origin.” Refuge and Hope International.