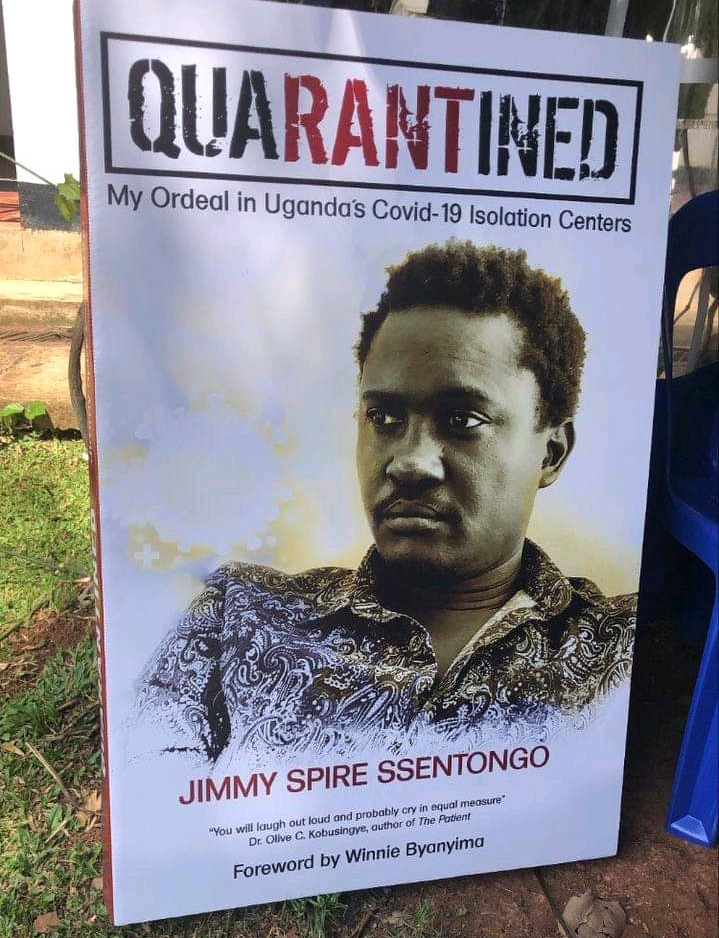 It was March 2020, upon arrival at Entebbe International Airport that Ugandan academic and editorial cartoonist at the Observer newspaper, Jimmy Spire Ssentongo learnt that he, together with other returning travelers would be quarantined as one of the first steps the country took to control the spread of COVID-19. He was also part of the first returning travelers to Uganda to undergo mandatory quarantine.

During 23 days in quarantine—more than the recommended 14 days, Spire, as he is commonly known by his pen name documented his ordeal and that of hundreds of people which he shared through social media. Those experiences have now been documented in a new book titled QUARANTINED: My Ordeal in Uganda’s COVID-19 Isolation Centres.

In the book, Spire documents what happened on arrival, in the 23 days he spent in quarantine, as well as experiences from people locked up in other quarantine centres that they shared with the cartoonist. The book also has a chapter on the fight to regain their freedom and what the government could have done better.

Although it is written like a memoir, Spire explains that the book also documents the experiences that other returnees were faced with while held up in similar quarantine centres that the government had set up in the early days or as part of its plan to control the spread of COVID-19 in Uganda. “I documented these experiences as a way of having an account of what happened, that we can learn from these experiences and what went wrong in order to improve or perform better in case we are to experience something like this (pandemic) on another occasion,” Spire said in a recent zoom meeting while launching the book.

“Much of what this book tells are the things that we wouldn’t have expected to happen in the first place,” he adds. Renowned for his bold, highly humourous cartoons in the Observer newspaper, while Spire documents his experience in quarantine in the form of text, there are a few caricatures that were captured during his time in isolation within the book.

Some of the key issues raised in the book include the requirement that those quarantined pay for their own accommodation and food at a hotel that had been identified by the government, general mistreatment, sexual harassment and escape by some of the quarantined people.

The book also tells the stories of returnees who were forced to sleep in hotel lobbies while spending days without food because they could not afford to pay the exorbitant costs that the hotels were asking for. “Everything showed that the government was grappling with many things in panic. The new directives had been issued without reflection on the necessities and basic dynamics of their implementation. Things were changing fast amidst uncertainties everywhere around the world and there would never be sufficient time for detailed planning. Still, Uganda’s unpreparedness and lack of care for those who would be put on institutional quarantine defeated all possible explanations” he writes in the book.

“What made our quarantine problematic was the fact that it was only on arrival at Entebbe International Airport that we learnt that we would undergo mandatory quarantine. So, you would expect that the group that was not aware (of institutional quarantine) would be treated in a certain way, mindful that they might not have been prepared in so many ways,” says Spire.

As the book further explores, with conditions unbearable, some people escaped from the various quarantine centres. “It was more of a concentration camp that we had been dumped into. The centres didn’t even meet the basics and all you had was a bottle of sanitizer…and beyond that, the government presence was felt by the presence of security personnel at the gate,” says Spire. Yet despite that, some people still managed to escape from the quarantine centres.

Dr Olive Kobusingye, a senior consultant surgeon and author who has written extensively on the state of healthcare in Uganda says while QUARANTINED is a book laced with great humour, the stories documented reflect the challenges that Uganda’s health sector continues to face. “Unfortunately, a healthcare system is not something you quickly put together when you hear that there is a pandemic coming. Our healthcare system should have been robust long before the pandemic showed up,” explains Dr Kobusingye.

Allana Kembabazi from the Initiative for Social and Economic Rights notes that the book and the experiences therein should be a point of reflection on the state of health care system in Uganda, including early preparedness. “When you ignore public health systems, the people that ultimately get hurt are those with no means. In the book, Spire details how girls who did not have money were sleeping in the common areas and were vulnerable to sexual harassment,” says Kembabazi.

“If you ignored your public health system and crippled it, you don’t expect it to suddenly function overnight. There was often a lack of empathy and forgetting that this is a rights issue. Human rights give us a great point of reflection around these issues,” she adds.

Despite the sad experiences that the book captures, it is not an entirely sad story.  “There is a lot of humour that you will find, interesting episodes of things we might not have mentioned while we were in quarantine, some not so funny, some funny,” says Spire.

Brutalized in the line of duty: Journalists speak out

An interview with a Human Rights Defender: Abductions and arrests are deeply deeply worrying