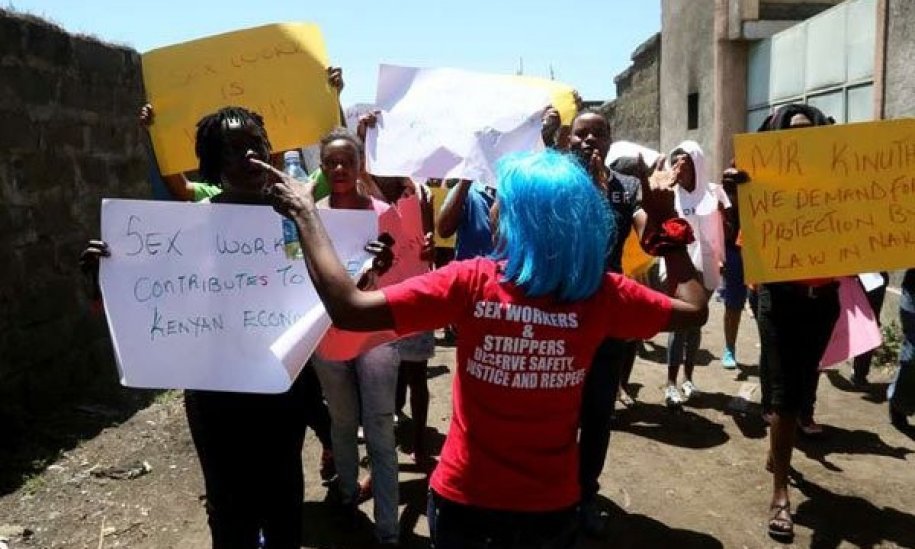 We didn’t see it coming, a novel virus that has put the world on its knees. For some months we thought we were safe until tragedy hit home, in Uganda when the first case was reported on March 21, 2020. What followed was presidential directives tightening different ways of life and total lockdown. Curfew followed, set from 7:00 pm – 6:00 am.

One by one businesses, hotels, clubs and lodges closed down. The streets slowly became empty. All public means of transport were barred. All this happened so fast that many were caught off guard. While the situation has taken a toll on everyone, it has intensified pre-existing stigma and inequalities that thrive in a capitalist and conservative society towards marginalized groups such as sex workers.

Throughout the process of enforcing the lockdown and curfews, sex workers’ right to health, fair hearing, privacy and right from inhuman degradation have been profoundly violated.  There are no emergency arrangements put in place to address the underlying push factors.

Sex Work and COVID-19 in Uganda

Sex Work in Uganda is illegal according to the Penal Code CAP 120 (Art 139). The practice is also socially, religiously and culturally unacceptable. Sex workers live on economic margins of Ugandan societies and because of this, they are excluded from the little emergency assistance available to other workers and communities.

Uganda has so far registered over 117 cases of Covid-19, 46 recoveries and no deaths as of May 18.  The country is still under a lock-down- due to be eased in the coming week. The Ministry of Health put in place safety guidelines in an effort to curb down the spread of the virus and through the #Tonsemberera Campaign which means Don’t Come Near Me they spread awareness on social distancing.

There’s been great progress in as far as preventing community transmission of the virus. However, the efforts to respond to COVID threaten human rights due to the brutal enforcement of restrictions by military and police forces. Most marginalized groups especially women who engage in sex work have become a target as more and more cases are registered among truck drivers who are some of the top clientele.

In just a span of two weeks, over 116 sex workers were arrested in different parts of the country. The number of unreported cases is unknown but anticipated to be higher.

The police claim the raids are avenues to stop sex workers from contacting truck drivers. Whilst the cause for stringent rules on contact with truck drivers fits in the legal enforcement around this public health crisis, the approach used is accompanied by bludgeoning, extortion and solicitation of funds from the already economically drained women.

Realities of many sex workers remain grim. Once hotels, lodges and clubs were closed, there was no home for sex workers who operate and stay in lodges. Some managed to seek refuge at friends’ places or partners where they likely face risks of abuse. Others are still stuck in the lodges and they have become a target for police raids because staying in one place in large numbers means defying social distancing directives.

Even under critical times like this, the exploitation is not limited to security operatives.

Lodge owners continue to demand rent from sex workers who are pretty much out of work. As the client based dwindled on the streets, a few have switched to online operations but it is difficult to navigate because of the threat of being exposed. The criminalisation of sex work means that anyone could report you and detention follows.

Access to services that address Gender-Based Violence and Sexual and Reproductive Health has been greatly hampered. Sex workers in need of antiretroviral therapy (ART) and Pre-exposure prophylaxis  (PREP) refills or SRH services are unable to get them under lockdown. While the government has put in place measures to reach out to people living with HIV, they are unable to serve everyone who needs the drugs.  All attention has shifted to COVID-19 neglecting other health needs.

On May 01, 2020, the Uganda Key Population Consortium together with other Sex Work Networks and allies presented a statement condemning the rampant raids targeting sex workers, barmaids and other vulnerable communities by police, Local Defense Units (LDUs), and Resident District Commissioners (RDCs). The raids are accompanied by extortion and solicitation funds from the victims while many have been forced into quarantine with no support system.

In April 2020, President Yoweri Museveni acknowledged sex workers need food support in these times but the current emergency responses have not covered them. Sex workers have since protested at district headquarters in a quest for the government support. In this regard,, the umbrella organization for female sex work led groups called Alliance of Women Advocating for Change has spearheaded the process of food distribution.

Sex worker’s groups, feminists and allies have jointly organized and fundraised for fellow sisters, educating communities about Covid-19, provided psychosocial support, strengthening the referral pathway for GBV and SRH services. Golden Centre for Women’s Rights, which I lead, jointly fundraised with other members for food relief for fellow sex workers severely impacted by the crisis.

In the shadows of the state response to COVID-19, we have developed and disseminated COVID safety and prevention, SRH and GBV awareness messages in English and Luganda languages.

We have conducted in-person and virtual sensitization and counselling for women sex workers in need of reproductive health, trauma and anxiety counselling as well as referred and linked them for access to justice and SRH services. Legal organisations like Human Rights Awareness and Promotion Forum (HRAPF) have gone above and beyond to ensure sex workers access justice.

Sex workers are continuing to risk exposure to COVID-19 and work because of marginalisations that existed before and which continue to be ignored during this crisis. Raiding, battering sex workers, throwing us out of lodges and later extorting money without addressing the underlying causes is causing more harm than good.

Adopting a holistic approach that puts into account the root causes and needs of sex workers will greatly solve this problem.  Only by upholding inclusive services that respond to Gender-Based Violence, health, access to justice as well as meaningful and authentic engagement of sex workers in Covid-19 Response decision-making can we begin to see progress.

This article was first published by African Feminism.