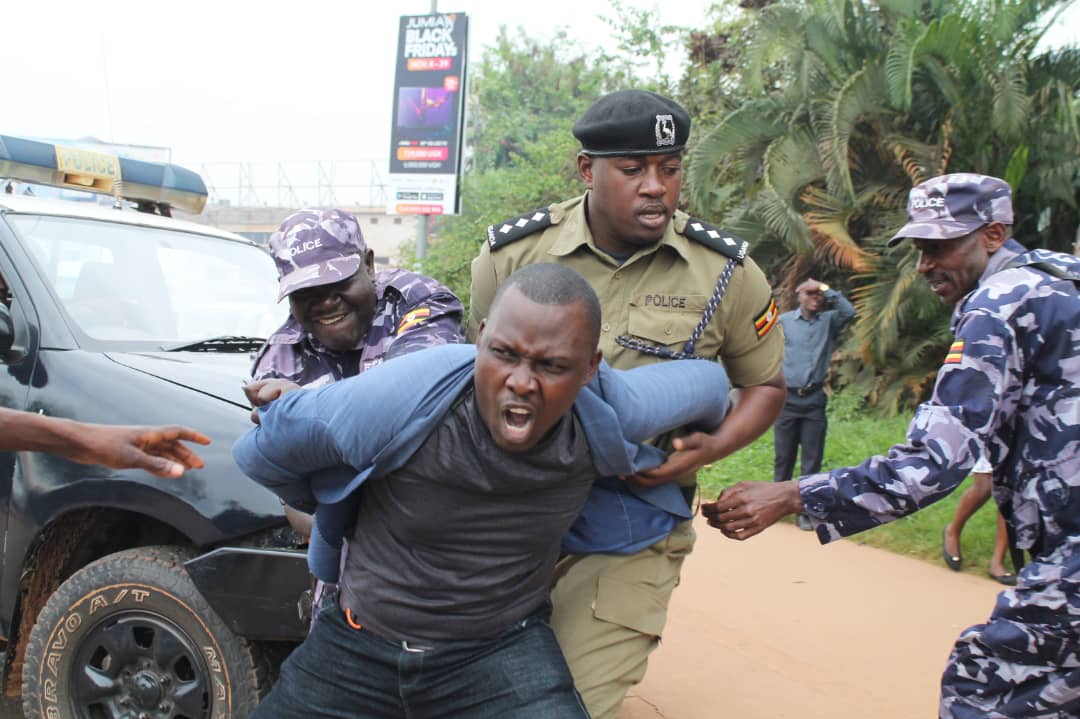 It started out as a normal working day for photojournalist Alex Esagala. He had been assigned to cover a demonstration at Makerere University, where students were protesting over a proposed increment in tuition fee.
But when he, and other journalists arrived at the university, they were denied entry. With the help of students however, the journalists managed to sneak into one of the students’ halls of residence where police and the military had taken siege.
Esagala recalls that as soon as they started interviewing the students, police and military personnel stormed the building and started teargassing and beating everyone who was inside.
“In that fracas, I noticed my colleagues, Lawrence Kitata of Bukedde newspaper and Chris Ssemakula of BBS Television were being beaten by security operatives using batons,” Esagala says.
Because he could not look on as his colleagues were being beaten, Esagala confronted the police.
“They started kicking me, teargassing and caning us like we were kids. They almost broke my camera. It was tough, the scene was scary,” he remembers.
But it was not the first time that Esagala, who works at the Daily Monitor, one of the major newspapers in Uganda has been a victim of police brutality.
In the course of his work, he says he has been assaulted by police at least four times and his camera broken in the process.
Even wearing press tags and jackets that clearly identify him as a journalist has not been helpful. In fact, he says journalists are always the first target for the police.
Esagala recounts the Makerere incident: “As I went ahead to take photos, a police officer threw a teargas canister that hit my chest. But I was wearing a bullet proof jacket, it exploded on my leg, tearing my trousers. My skin felt like it was on fire and I was taken to the hospital.”
Yet despite incidences like these, Esagala says he is not cowed.
“I love journalism. It is my passion. Assault and intimidation by security operatives will not stop me from doing my work,” he says.
Testing the limits
Over the past years, journalists have been the target for intimidation and brutality for simply doing their work. There have been numerous cases of journalists being severely beaten, often times by security operatives and their cameras destroyed.
The Human Rights Network for Journalists (HRNJ-Uganda) in its annual Press Freedom index reports states that at least 163 cases of violations and abuses against journalists and media houses were documented in 2018. This is an increase from 117 cases registered a year earlier.
The impact of these assaults is reflected in the country’s ranking on the global press freedom index. According to the 2019 Global Press Freedom Index by Reporters Without Borders, Uganda dropped eight places from 117th position in 2018 to 125 in 2019. Uganda ranks behind neighbours Kenya and Tanzania which occupy 100th and 118th positions respectively, while Burundi is at number 159 and Rwanda at 155.
Some of the reasons the country’s ranking dropped on the index include intimidation and violence against reporters.

The report also accuses security agents as being key leaders in violating the rights and freedom of journalists by targeting them through arbitrary arrests.
For example, James Akena, a photojournalist with the Reuters news agency was brutally beaten by Uganda People’s Defense Forces (UPDF) soldiers while covering a street protest during the arrest and detention of Kyadondo East MP, Robert Kyagulanyi Sentamu alias Bobi Wine in Kampala on August 20, 2018.
The incidence that drew condemnation from the public was captured on camera. It showed several army officers indiscriminately beating Akena, who was kneeling on the ground and holding his camera.
Akena’s injuries confined him to a wheel chair as he slowly recovers.
In another incident earlier, Andrew Lwanga, a journalist formerly with WBS TV was in 2015 severely beaten by the then former commander of the Old Kampala Police station, Joram Mwesigye. The beating injured his spinal cord, forcing him to use crutches. After undergoing surgery at a Kampala hospital, Lwanga has made steady recovery since 2015.
Uganda Journalists Association (UJA) President, Bashir Kazibwe says many journalists who have been victims of brutality by the State unfortunately often never get compensated
Instead, because of the frequent harassment and intimidation, some journalists hold back from reporting some issues, including public demonstrations, thereby denying the public the right to access to information.
“This is not a fight for only journalists but all Ugandans. Ugandans need to come out and strongly condemn security’s brutality against journalists,” Kazibwe says
Efforts by journalists to have a meeting with the Police leadership, including presenting them with a petition over continued harassment have not yielded much.
When journalists took a petition to the police headquarters recently, they were instead arrested, but later released.
“All we want is to dialogue with the police leadership to iron out issues related to abuse of journalists’ rights and freedom of expression. However, it is sad that they have ignored our request,” Kazibwe added
Putting the attacks into perspective
Dicta Asiimwe, a senior journalist says, frequent attacks on the media often results into self-censorship.
This, according to Ms Asiimwe is bad for democracy because citizens often ending up missing out on critical information that they need to know to make informed decisions.
She adds that some journalists even stop covering events where they anticipate that they will be attacked and beaten by security agencies.
And the impact of such attacks is often long term.
“Some journalists have been maimed by security officers. The productivity of a maimed journalist reduces. Some journalists lose jobs after they have been assaulted on duty. This is bad for media houses and the journalists,” she states
Nicholas Opiyo, the Executive Director, Chapter Four-Uganda, a human rights organisation, says the increasing attacks on journalists in the country needs to be understood from a political perspective
He explained that the continuing deterioration of any country’s governance system is often followed by attacks on independent press and press freedom in general.
Opiyo notes that over time, the media in Uganda has been facing subtle repression, which is now taking the form of attacks, arrests and intimidation.
“Stifling of civic space and the increased attacks on journalists reflects the state of our politics and how State actors view the role of journalists. The more autocratic the system, the more intolerant it is to free expression and media freedom. The more the media seeks to exert itself to claiming its space, the more lethal the reaction,” Opiyo says.
He adds that there is complete lack of support from media houses when some journalists are attacked in the line of duty, adding that in most cases, the media house will abandon the journalist and move on to the next person who can report. The journalist is left on their own, and sometimes, they may accept little money from the tormentors and let the case ‘die’.
Lack of solidarity among journalists
According to Opiyo, the lack of solidarity amongst journalists in the country is also a major reason why journalists continue to be abused by both media house owners and security operatives.
“Unless journalists learn to come together and stand up for themselves against abuse and neglect, they will always be vulnerable and disposable by both media owners and those who abuse them.
Opiyo says professional journalists need to reclaim their space and protect the profession. They also need to report about abuses inflicted on fellow journalists, the same way they report against human rights abuses against other people.