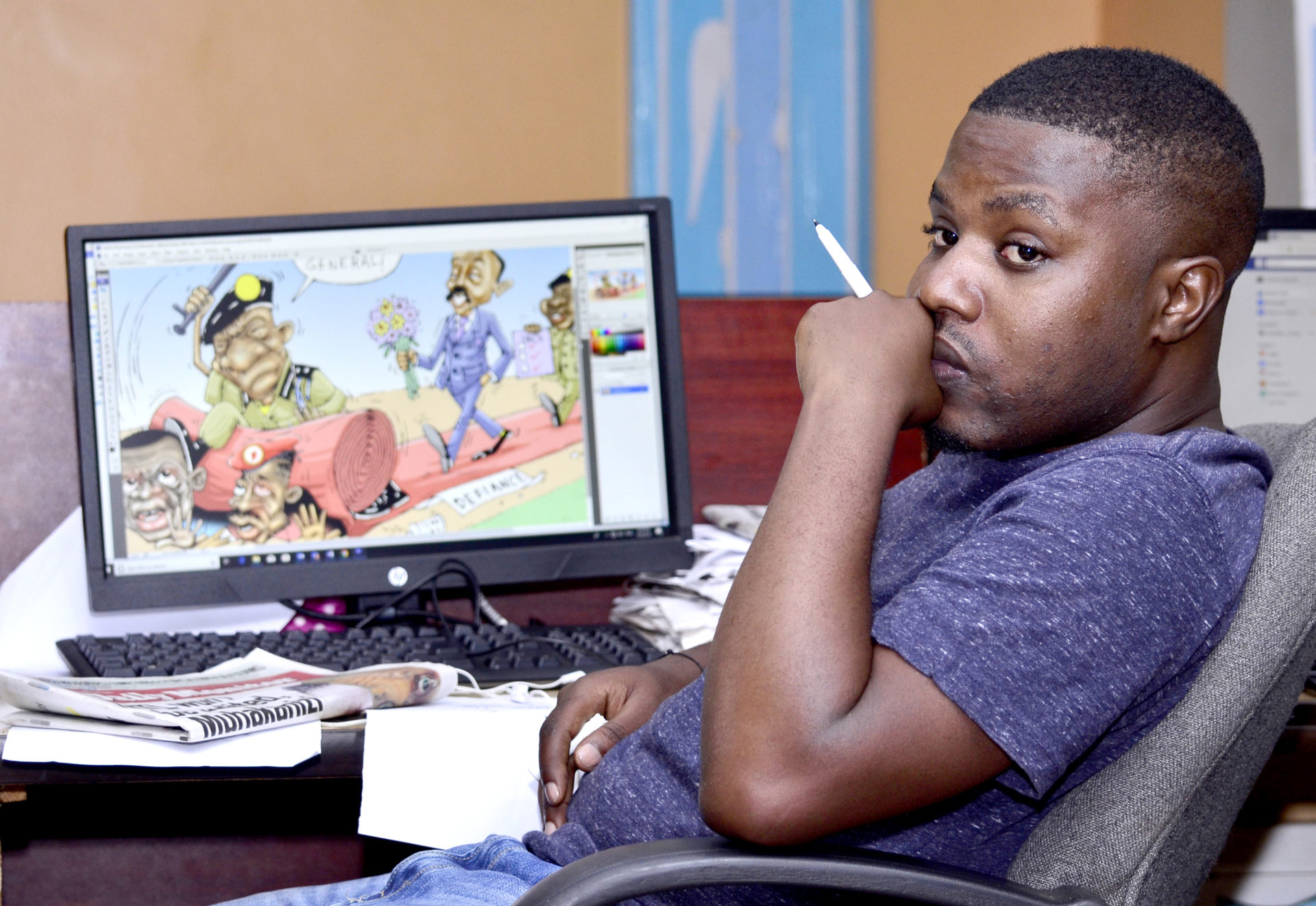 Cartooning is a skilled art. Beyond the laughter that they enlist, cartoons also challenge the status quo and draw the publics’ attention to current affairs and issues, sometimes depicted in provocative ways. In Uganda, cartoonist Chris Ogon Atukwasize, better known by his pen name Ogon is doing just that. We caught up with him to tell us more about his work, the public figures he has caricatured most, and the African cartoonists whose work he draws inspiration from.

Every day, his cartoons draw plenty of laughter and offer entertainment to his followers, fans, and those who read the Daily Monitor newspaper. They are also widely shared on social media platforms. But Chris Ogon Atukwasize sees his illustrations and drawings as offering more than just a light dose of laughter. “People might look at the way you exaggerate someone’s head in a cartoon and laugh. Others will discover something new because the messages can be subtle,” he says.

But sometimes, the caricatures seem almost straightforward based on the characters involved and events happening in the country at a particular time, yet different people might still interpret it their own way. “I’m usually not bothered by that. I think readers are entitled to their own interpretation or misinterpretation of my cartoons. Sometimes people come to my social media pages to ask what I intended to mean with a particular cartoon but I usually prefer not to respond. I let the reader decide for themselves what I was trying to put across,” he further explains.

Ogon’s drawings often touch on several subjects; corruption, politics, economics, education, poverty, human rights violations, health, and social justice. With a Twitter following of more than 14.0 K, he uses sharp, humor-laced observations to capture his audience. But he can also be provoking sometimes. Take his 2019 cartoon that depicted Alaa Salah, the 22-year-old Sudanese woman who became the face of Sudan’s revolution against President Omar al-Bashir’s rule against that of a Ugandan woman preoccupied with taking selfies only. With many people enraged with the cartoon that seems to downplay the achievements women have contributed to over the years, Ogon says the message was taken out of context and not for what he meant it to be.

Or the 2015 cartoon in which he depicted how Kenya Airways snubbed a request from President Museveni to be picked up from Mbarara and transported to Nairobi for the East African Community Heads of State Summit at a time when Uganda had not revived its National Carrier. Or a 2016 cartoon based on utterances made by the ruling NRM party secretary-general, Justine Lumumba, issuing threats that those who attempted to protest against the 2016 elections results at the time would be shot. According to Ogon, although it’s been five years since this particular cartoon was first published, people continue to bring it up whenever cases of human rights violations are reported in the media “This is because the actors and perpetrators are still the same. So, it shows you the cartoon still has some relevance.” 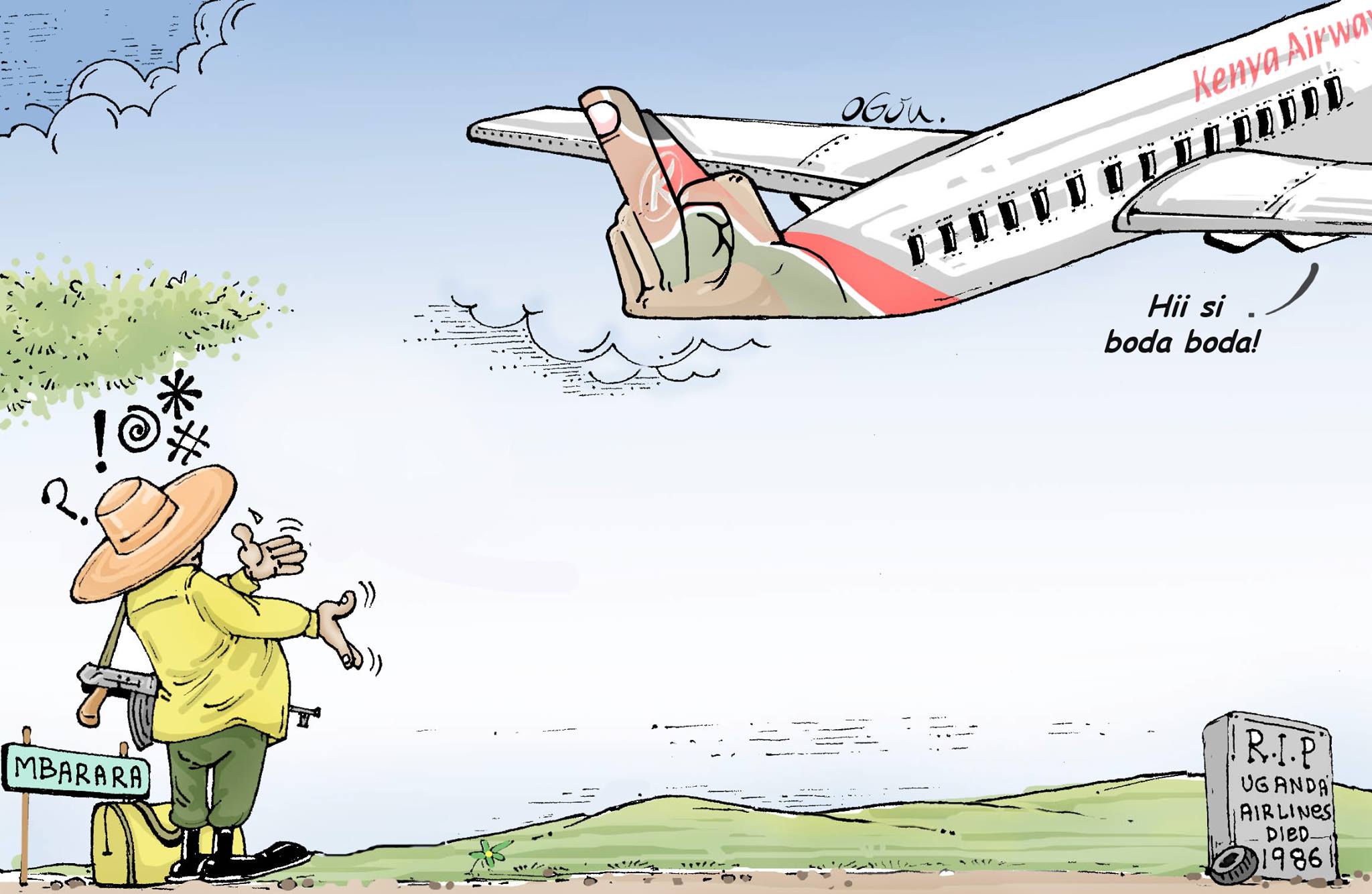 And every day, relevance is what he looks out for when conceptualizing ideas for his sketches.“In general, I focus on trending topics, what people are talking about. I often go for something that is already in the news because that way you will grab the attention of the public.”

But sometimes, Ogon also likes to set the agenda, especially when it comes to pressing issues such as human rights violations. Cases of state-sponsored violence, abductions, long detentions without trial and torture, especially of people who challenge the government have been some of the continuous violations that happen in the country every day.

“For example, when it comes to drawing cartoons about abductions and kidnappings, it is not satire but you want to join a cause and bring interest and attention to it and that has worked because people then take notice and interest in the issue,” he adds.

Although he is now a household name because of his cartooning work, Ogon did not start out as a newspaper or editorial cartoonist. “Growing up, I was interested in visual art but not necessarily drawing cartoons. I was also keen on news and current affairs and often read the newspapers when my father bought copies,” he remembers. How he ended up as a newspaper cartoonist, he says was a merger of his two interests—Ogon who is keen on news and current affairs, and Ogon who is interested in art. “Now that I do editorial cartooning, I get to draw, but my interest in news and current affairs is also covered,” explains the soft-spoken artist. With his love for drawings natured at a young age, the 31-year-old went on to graduate from Makerere University with a degree in Industrial and Fine Arts, majoring in illustrative art.  After university, Ogon got a job doing illustrations for book publishing companies.

“There, I would do visual illustrations to accompany the text and stories in the books,” he says. Then in 2012, an opportunity presented itself to do newspaper cartooning. First at the Kampala Sun and from 2013, at the Daily Monitor newspaper where he still works.

“I used to post my work mostly on Facebook and at the Daily Monitor, I started off by doing illustrations for the weekend papers to accompany stories that had no photos, or that the editors thought would be better told with creative visuals,” Ogon explains. Occasionally though, he would also do editorial cartoons. But it was in 2016, after the passing of the then Daily Monitor editorial cartoonist that Ogon took on the role on a full-time basis.

Since then, his drawings have become a staple for readers of the Daily Monitor and social media users. Many politicians and other public figures who make up a bigger percentage of the people he has caricatured have been happy and enraged by his work in equal measure. “In one way or the other, almost all the presidential candidates in the recently concluded elections used my cartoons to put out a message,” says Ogon. But that has also not stopped them from being curious when they are depicted in ways they don’t find appealing.

“Recently, one of the presidential candidates called me to complain that I have always been unfair in the way I draw him He said I had portrayed him negatively during the campaigns, although he acknowledged that I was doing my work.” Even though his drawings are often critical of government actions and inactions, Ogon says he has received a lot of encouragement from government officials who reach out to him privately. “Whereas there is bad feedback, there is also good feedback by the same people in government—those who appreciate your work but will not tell you publicly. But they will send you a message and say keep pushing this message,” shares Ogon. 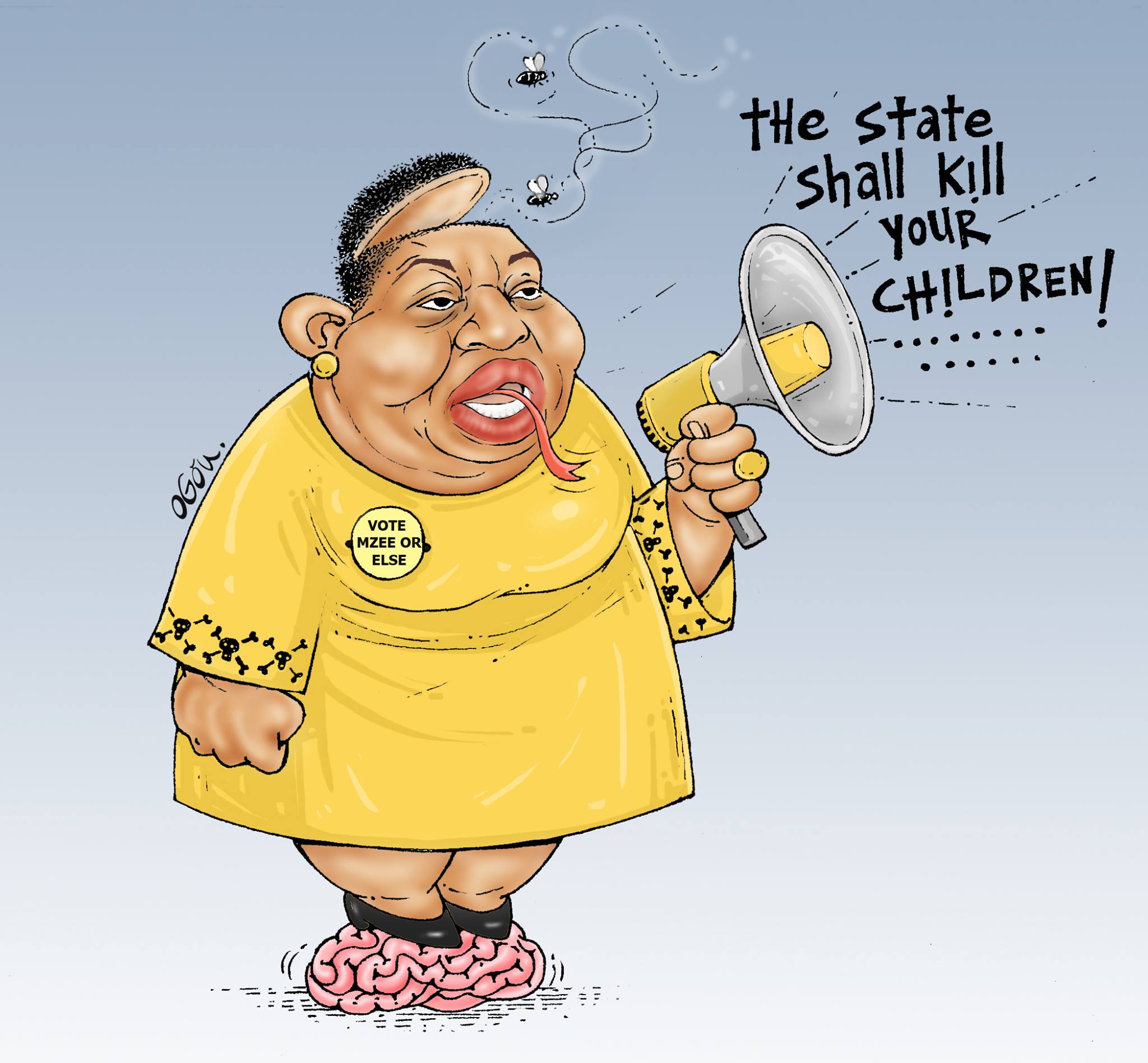 From concept to cartoon

So, what does a day in the life of a cartoonist look like? Not full of laughter as you might imagine. Or at least going by how Ogon’s days go. First, he says you have to read a lot, talk and listen to a lot of people and always do research. In short, you have to be well updated and informed about events happening around you and the rest of the world. Reading and researching are then followed by conceptualizing an idea and turning that concept into a sketch and drawing. Then there is the coloring and editing of the sketches. All these processes, he says take a significant amount of time.  “Some people think you just sit there and draw. Yet it is time-consuming—you have to read. If you don’t read, you will be exposed by the readers,” Ogon notes.

Ogon also prefers to draw most of his sketches in the night when the rest of the world is quiet and asleep. “I develop most of my concepts and do the sketches at night when I am alone and that’s when I can concentrate. During the day, I’m just finalizing the drawings, reading and looking at feedback from the readers.”

His most caricatured public figure? President Museveni, says Ogon without hesitation. Because he is the president, but he is also easy to draw, he adds. But come the next Parliament, Ogon is looking forward to drawing cartoons of Mohammed Ssegirinya, an incoming legislator.

Outside his own drawings, Ogon also takes time to religiously follow what other African creatives are doing, especially those whose work he has grown up consuming and admiring. Cartoonists such as James Gayo, Snoggie, Ras, Gado, and Zapiro are the ones he draws the most inspiration from. But his all-time favorite is the South African, Jonathan Shapiro, known by the pen name Zapiro who has won hearts and minds across the continent with his no-holds-barred caricatures.

“Zapiro is brutal, highly knowledgeable, consistent, humorous, and a fantastic artist. Every cartoon he draws is thought-provoking and often requires careful study. I learn from him every day and he is a great ambassador for freedom of expression,” Ogon says.