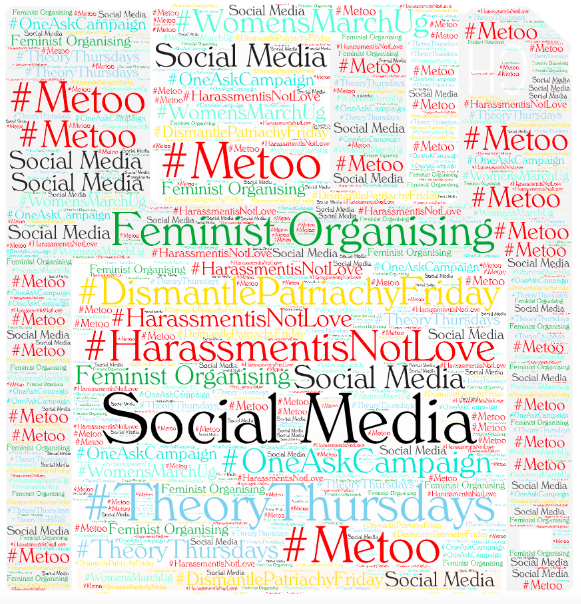 Graphic perhaps, but she typed it out, exactly the way it had happened. Well, she could have taken it to the Police as her statement or, kept it as a record of abuse against her, but she posted it all on Facebook–her rape experience. She neither concealed her nor the alleged perpetrator’s identity. It was posted for all to see, read, identify and judge.

Many commended her for her courage to reveal her identity. She was among the numerous Ugandan women who took to Twitter and Facebook recently to narrate their rape and near-rape experiences. A number of them had the same courage to reveal their identities as well as that of the perpetrators. Others hid their identities but revealed the perpetrators, and others hid both theirs and the perpetrators’ identities. Social media platforms went ‘ablaze’ with experience after experience and furious backlash from mostly men and some women as well. Some alleged perpetrators sprung up to defend themselves in writing, while others dropped notices to sue, and a number also kept silent about accusations brought against them.

And the online public was out there to pass judgment, with some saying the accusations were a result of love gone sour, while others believed the accusations because there are particular names that kept coming up as victims named their tormentors.

In Uganda, women are increasingly using the online sphere to share experiences and speak out against sexual harassment and violence. For example, #OneAsk, an online and offline campaign spearheaded by Akina Mama Wa Afrika, a feminist pan-African organisation to lift the lead on sexual violence has been sparking conversations on the vice.

The campaign demands accountability from various stakeholders, including the government to make learning and working spaces safer for women. Akina Mama wa Afrika has also been at the forefront of the Uganda #MeToo campaign, as part of the global movement that hopes to end impunity on sexual and gender-based violence.

Primah Kwagala, a human rights lawyer and founder of the Women’s Probono Initiative (WPI) says women need to use every platform and avenue available to them to speak out against all forms of violence. Social media, she says has helped these conversations to happen. “Our lives begin to end the minute we decide to stay silent on things that matter,” says Kwagala. She adds that women need to continue raising the issues that matter to them, including zero tolerance for violence.

“I am glad that we are in a place where we can discuss how to deal with the situation and its gravity. I celebrate courageous women who have dumped ‘social-cultural dignity’ to speak their minds on social media. These women are brave and I applaud them,” she adds.

Ophelia Kemigisha, a staff attorney at Chapter Four Uganda, who has been part of numerous online campaigns believes such initiatives keep discussions on women’s rights and feminism going, and inspire more feminist actions in different places, leading to a greater impact.

Some of the campaigns that Kemigisha has taken part in include the #JusticeForSamantha campaign, which was aimed at bringing to the attention of the public, the case of Samantha Mwesigye, the former Senior State Attorney who had come out publicly to speak about years of sexual harassment that she suffered at the hands of her boss.

She was also part of the #WomensMarchUg campaign that followed the mysterious murders of women in and around Kampala and #HarassmentIsNotLove, which was aimed at correcting the narrative that had been perpetrated by mainstream media houses concerning the case of Sylvia Rwabwogo, a Member of Parliament who had reported a man for cyber harassment among others.

Kemigisha points out that she felt compelled to take part in the #WomensMarchUg because the government was showing little commitment to investigating the murders of women that had been going on for several months. “I was especially concerned about the victim-blaming narrative that referred to the women as prostitutes, as women with many boyfriends, etc,” she says.

Some of the recurring online campaigns she is part of include #MenAreTrash which aims to highlight the pervasiveness of sexual violence in the society, #DismantlePatriarchyFriday which highlights concepts that should be learned and unlearned for the dismantling of the patriarchy; and #TheoryThursdays which aims to bring more feminist theories to the attention of feminists.

Kemigisha says it is always an enriching experience taking part in campaigns of this sort because it helps to build a community with feminists, not just in Uganda or the region, but also globally. She believes that the fact that more online campaigns have happened in the recent past is testimony that progress is being made and impact is happening.

Kemigisha is all praises for the recent online debate on rape. “I believe it was worth it because it did a better job of raising awareness about the pervasiveness of sexual violence, maybe more than any campaign could have created. It was powerful to read the words of survivors/victims themselves and to bring perpetrators to account in a way,” she says.

Online platforms amplify experiences across the continent. Pauline Kahuubire, the communications, and advocacy official at Akina Mama wa Afrika (AMwA) says online campaigns are the way to go because the platforms can reach audiences that would not have ordinarily been reached. “It is more like taking the work we do on the ground every day to the internet – raising awareness and amplifying the lived experiences of women across the continent. Our campaigns have focused on a number of issues such as sexual violence, labour rights and conversations on topical issues,” she says.

Kahuubire further notes that numbers reached vary for each campaign but this can be approximated at a total sum of about 200,000 users from AMWA’s analytics. “The campaigns have influenced conversations on online platforms on a variety of issues. However, our learning point is that online activism works best hand in hand with physical interventions,” she notes.

AMwA’s #OneAskCampaign saw users of social media speaking out on the various experiences they went through such as having no knowledge of sexual harassment policies, while sexual harassment was happening daily. Institutions and authorities were called out to be more accountable as far as curbing sexual violence is concerned.

Regarding the recent rape debate online, Kahuubire opines that seeing victims and survivors speaking out is a powerful move considering the fact that women have always been muted, and even then, the topic of sexual harassment is a crucial one, but one that often carries with it shame and victim-blaming. “For a woman to have the courage to speak out and name her abuser is commendable. Even more important is the fact that fellow women will believe her. Such actions set a precedent for future generations of women who will have no fear speaking out and confronting the injustices that they face today,” she says.

Furthermore, at the heat of the rape conversations on social media, Kwagala, and her team offered legal support to all those who were in need. As a result of that call, so far four victims have sought legal support from Women’s Probono Initiative. “It is not easy to come out and say I was raped – let alone to name individuals who did it and got away with it. I believe these women and pray that they get the justice they deserve,” she says.

As women heartily take the gender-based violence fight online, they can report online aggressors too. Under the Computer Misuse Act, any person who willfully, maliciously and repeatedly uses electronic communication to harass another person can face imprisonment not exceeding five years or both.

Kemigisha is quick to warn that women who carry on such campaigns get a lot of backlash which affects their mental health.“In terms of mental health, I have found that such discussions often trigger anxiety and depression on my part and other feminists I know,” she reveals.

She further explains that she often has to turn her social media account settings to private mode to keep the trolls away. “I once tweeted an excerpt from an article in the Guardian concerning an advert that was portraying street harassment as something normal. I did not get specifically threatening messages but the sheer amount of negative responses was a concern and forced me to put change settings of my Twitter account on private mode for a few days,” she recalls.

In reference to the online debate on rape, Kwagala affirms that women are actually safe exposing perpetrators online than it would be privately.“This is because you have the public in the know of who could possibly harm you. But if they have privately harmed you in the past, where’s your security if you do not expose them to the public? Silence will not save you-speak out!” she declares.

In the face of COVID-19, community leaders embark on door-door awareness