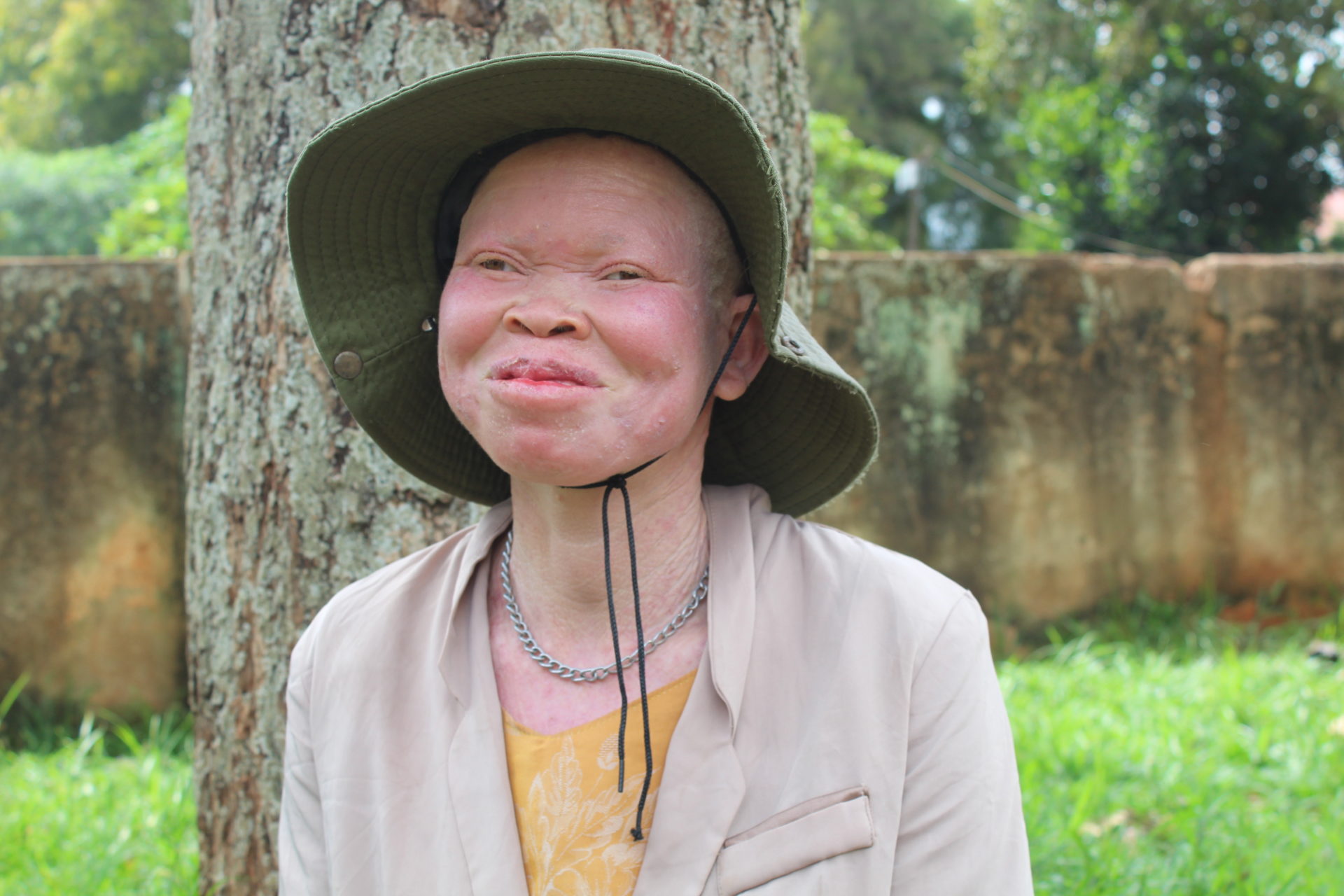 As a young girl growing up in rural Uganda, Fatia Nakaibale spent a big part of her childhood tiling the land together with her family. “We would spend long hours in the garden. The sun was often too hot, which used to affect my skin,” Nakaibale remembers.

The outdoor environment was particularly harsh for Nakaibale because she was born with albinism—a hereditary condition in which a person lacks melanin pigment in the skin, hair and eyes. The absence of melanin means people like her are not protected from the sun’s dangerous ultra violet rays.

And so, by the time she was 18, Nakaibale started developing lesions on her skin. “It began with a small blister on the back but it has now expanded to become a big wound, which is painful,” she says.

When we first met, she had just returned from a second review appointment with the doctor, following surgery on her back two weeks earlier.

A biopsy has also been carried out to establish if the lesions are cancerous, and Nakaibale, now 30, will soon know her fate.

In Uganda, people living with albinism still face a lot of discrimination, stigma and social exclusion, but sun exposure leads them to face an even greater life-threatening problem–cancer.  Without melanin to protect them, the chances of a person with albinism developing cancer of the skin are much higher than the rest of the population.

According to a report by Ikponwosa Ero, the UN Independent Expert on Enjoyment of Human Rights of Persons with Albinism, skin cancers are considered one of the biggest killers among this group of people. The UN estimates about 98 per cent of persons with albinism globally do not live beyond the age of 40 because of poor health, with skin cancers contributing at least 80 per cent of these deaths. The problem is particularly dire in African countries where exposure to the sun is an everyday part of life for majority of people, especially those who work in agriculture and other informal outdoor settings.

Henry Manson Ngobi, a dermatologist who works closely, and treats people with albinism says that despite skin cancers being a big health problem, most cases remain undiagnosed because of poor knowledge of the symptoms of the disease in the communities.

Ngobi notes that most skin cancers first present as lesions before slowly developing into full-blown diseases, which become expensive and difficult to treat.

He says the common pre-cancerous conditions for people with albinism include Actinic cheilitis, which causes sores on the lips, solar elastosis, a condition that leads the skin to lose elasticity especially around the neck leading to early onset of wrinkles and solar keratosis which leads to thickening of the skin.

If these symptoms are not treated in the early stages, they become full-blown cancers.

“When we go for outreaches, we health educate and tell people with albinism to visit a health facility in case they see anything strange on their skin. But many still come when it is too late because of the myths in the communities,” Ngobi explains.

“Some people have been told that when they go to a health facility, the surgery performed to remove the lesions will only make them feel worse. So many prefer to remain at home,” he adds.

Despite these challenges, access to sunscreen, which would give a lifeline to people with albinism is not universally available, and where it is, many people cannot afford it because of costs.

People with albinism usually require sunscreen with a special formula and Sun Protection Factor (SPF) of at least 50, if they are to benefit from its protection. These sunscreens often cost between $30 to $50 per bottle—a prohibitive amount for most people with albinism who live in abject poverty.

Nakaibale knows the danger sun exposure can cause to her skin. She has adopted ways to protect herself from the sun by wearing long-sleeved clothing and a wide-brimmed hat—as health professionals often recommend, yet until July this year, she had never used sunscreen for protection.

“It was too expensive for me to afford so I had to find other ways of protecting my skin. But since I started using sunscreen, it has improved my skin tremendously. My skin feels very soft, except for the painful wound on my back,” she says with a smile.

Nakaibale received her first bottle of sunscreen from the Source of the Nile Union of Persons with Albinism (SNUPA), a nonprofit organization that advocates for human rights and access to quality services, including healthcare for people with albinism.

It was during one of their community health outreach programmes that the organization first met Nakaibale.

“After the dermatologist carried out tests on her, we realized that her wound could be a sign of cancer but more tests needed to be carried out and so she was referred to the hospital,” says Peter Ogik, who heads SNUPA.

In Uganda, albinism is recognized as a disability and therefore, the lack of a national policy and accessible support specifically for people with albinism means most of the issues they have to deal with are broadly grouped under Persons with Disabilities.

“The problem with this is that some of the problems that people with albinism face are so unique that grouping us under people with disabilities mean we cannot adequately address specific challenges like skin cancers,” says Ogik.

One of the achievements for people with albinism in the past year was the advocacy led to the government announcing the removal of tax on sunscreen products imported into the country.

While a small victory, Ogik says it’s not enough and hopes the government can start providing free sunscreen for people with albinism by including it as part of the Health Ministry Minimum Health Care package. That way, he says people with albinism can access free sunscreen just as the rest of the public accesses free anti-malaria or free anti-retroviral (ARV) drugs for people living with HIV in public health facilities.

“Sunscreen is part of us, we cannot live without it. So, for us to be able to have a sustainable supply, the government needs to support the whole process,” he says.

In May this year, Parliament also passed the Persons with Disabilities Bill 2018, which among other things hopes to ensure that persons with albinism will have free access to sunscreen as a protection measure against cancers and other health complications that they commonly face.

For now, the burden of accessing sunscreen falls on the shoulders of organizations like Ogik’s, which in turn rely on donations from abroad to make the products available to those who need it.

“We give the sunscreens free of charge because they are expensive and many people with albinism cannot afford to buy them. Even where others can afford sometimes it is not readily available on the market,” explains Ogik.

Since last year, Source of the Nile Union of Persons with Albinism has partnered with Advantage Africa and Ultra Sun, a company that manufactures sunscreen to provide free sun lotion to people with albinism in the country.

They make two donations every year, consisting of 9,000 tins of sunscreen lotion each.

The donated sunscreens are often distributed through outreaches which are carried out every four months, and beneficiaries receive two bottles each of sunscreen—one for each month.

The sunscreens, according to Ogik are making a big difference in the lives of people living with albinism.

“Not only does it protect us against the rays of the sun, but it also makes our skin look much better. Children with albinism also face less stigma when their skin is good,” says Ogik.

Ogik is a believer in sunscreen. He says he religiously uses it himself to show to the rest of the albinism community what difference it has made in his life.

“But I don’t only tell them to wear sunscreen and lip balm with SPF, I often tell them to back it up with long-sleeved clothing and wide-brimmed heart. You know the sun is our number one enemy,” he concludes.

For Ugandan women, every pregnancy is a thin line between life and death