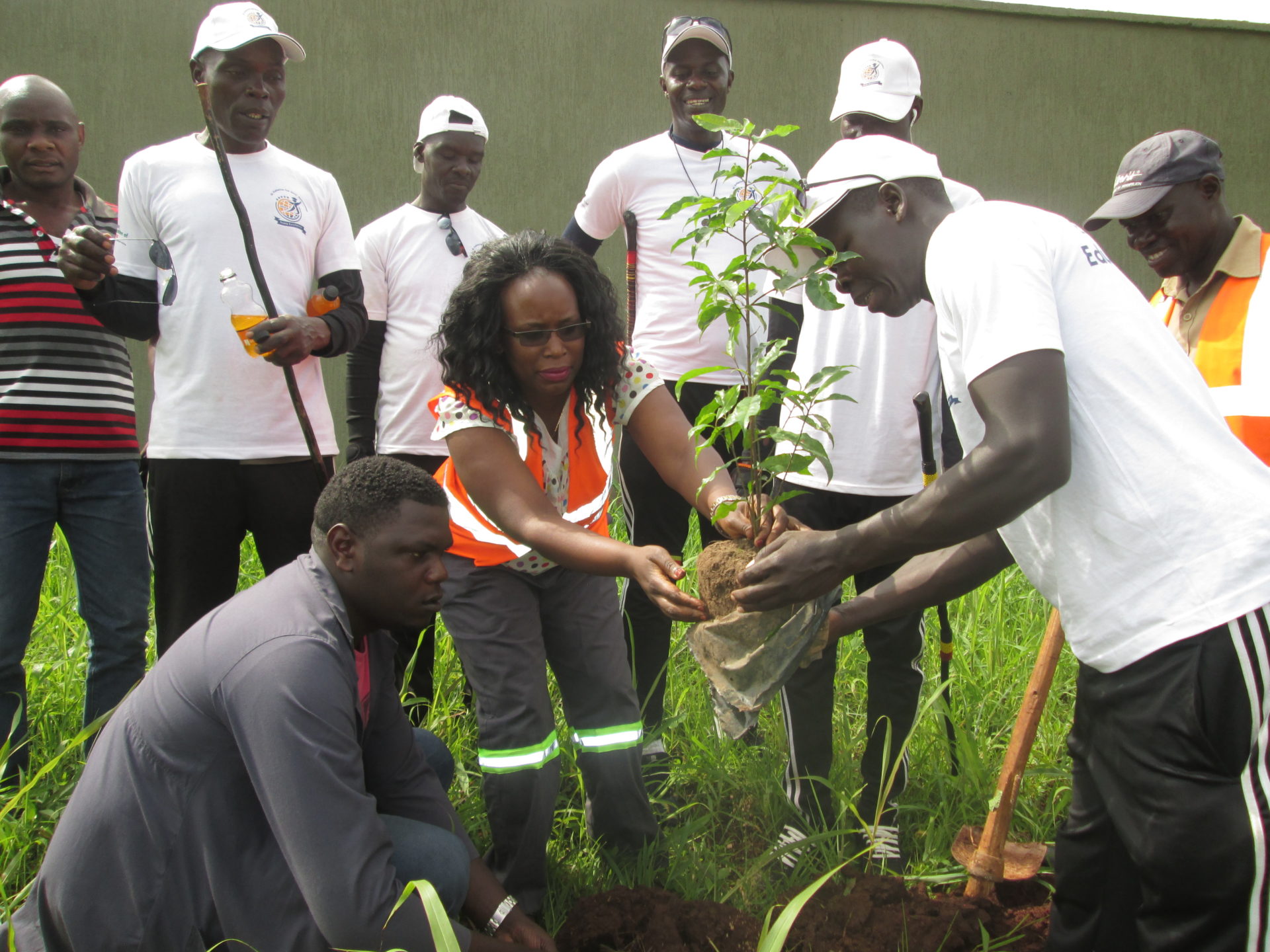 A group of soaked walkers waited under a bridge for the heavy rain to stop so they could continue their trek to plant trees in a town about 150 km (93 miles) from Uganda’s capital. Over the previous two days, the Walkers Association of Uganda had covered about a third of the distance on foot to their destination in the eastern district of Kamuli. On its regular outings, the group – not your average bunch of fitness fanatics – raises awareness about climate change and plants trees on stopovers at schools, markets and factories, as well as denuded land and roadsides.
“For us, walking is not just a form of physical exercise – it is a tool we use to advocate against climate change,” said Geoffrey “Walker” Ayeni, 41, a member of the group since 2007. In 2017, the association decided to add climate activism to its goals. The move came after 30,000 people were displaced by floods in the east of the country, some of them hit by landslides in the Mountain Elgon region along the Kenyan border.
In March 2016, Uganda had recorded its highest temperatures in decades at close to 38 degrees Celsius (100.4 Fahrenheit), according to the national meteorological authority, followed by a long dry spell. “I couldn’t just sit and watch,” said Ayeni. He kicked off the campaign by walking almost 320 km alone, from Kampala to Kapchorwa in eastern Uganda, to draw attention to climate change. Along the way, he delivered petitions to district governments, calling for environmental protection. “I felt like it was our moral duty to do something; to move across the country and tell people about climate change and encourage them to adopt healthy practices like tree-planting,” said Ayeni, clutching his beaded walking stick in the colours of the Ugandan flag.

‘ALARMING’ TREE LOSS
As climate change takes a toll globally with more extreme weather and rising seas, researchers say one cost-effective solution is to plant trees. In July, scientists at the Switzerland-based Crowther Lab said the best way to keep climate change in check would be to replant destroyed forest areas the size of the United States, which could capture two-thirds of the carbon humans have emitted since pre-industrial times. In East Africa, communities are already experiencing the adverse effects of a warming planet, with erratic and extreme weather becoming common. Deforestation adds to the dangers, as tree loss disrupts local rainfall cycles and slopes become unstable.

In the past 25 years, Uganda has lost an average of 122,000 hectares (301,500 acres) of forests every year due to large-scale tree-cutting for timber and charcoal-burning. Civil society groups have blamed a lack of government capacity to coordinate and enforce preventive policies, as well as insufficient funding to monitor and protect forests.
“The rate at which trees are being cut down is alarming. As activists, we can’t just sit and wait for the government to step in,” said Ayeni. In northern Uganda, a major hub for charcoal production and home to endangered tree species like Shea and Afzelia africana, local groups are naming and shaming key players involved in the lucrative charcoal business.
The walkers, meanwhile, have a target of planting a million “symbolic tree saplings” each year on their quarterly expeditions of up to two weeks, with the aim of encouraging local communities to embrace the effort themselves.
The group has 50 members from all walks of life – civil servants, business people and students – who work on a voluntary basis, backed by donations from well-wishers. As well as tackling climate change, they also address gender issues, such as promoting girls’ education, said member Grace Santa Achan.
In the early days, the group focused more on making people aware of climate change and forest loss than planting trees because of the tricky logistics of carrying saplings and tools. But in 2017 they approached the environment ministry, asking it to provide seedlings. “Since that time, we don’t have to worry about carrying seedlings because we are supported by every (district) environment office,” said
Achan. Florence Grace Adongo, director of water resources management at the Ministry of Water and Environment, said working with the group was a cost-effective approach. “Before it was hard to reach out to every community because we had a problem with inadequate manpower,” she said. “But now this group is able to reach out to the people on the grassroots for us.”
In Nakasongola and Luwero districts, for example, the walkers planted between 80 and 100 “symbolic” trees in each place, spurring communities to plant thousands more, she noted.
BRANCHING OUT
The walkers are becoming well-known and are often showered with gifts on their travels by local communities, including retailers, pedestrians and street vendors. Next March, during the national environment week, the group plans to walk about 270 km to Mbarara district in the southwest to “save” the River Rwizi, whose water level has dropped alarmingly. Trees will be planted along its buffer zones to help restore water catchment areas that have been damaged by sand mining and human
encroachment on the land. The group is also planning to go further afield, walking some 1,700 km
south to Dar-es-Salaam, Tanzania’s commercial hub on the Indian Ocean,
in November 2020. “This problem affects all of us,” said Ayeni. “That is why we want to cross borders and spread our word.”

This article was first published by Thomson Reuters Foundation

Life or death at 40 weeks: Why are women still dying during childbirth in Uganda?